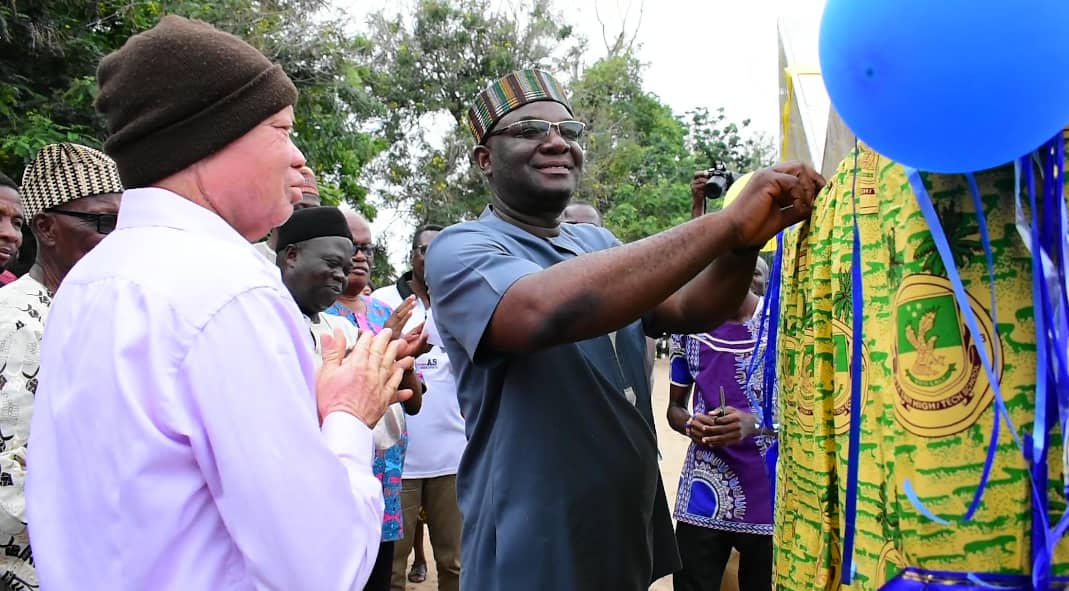 In an awe inspiring story of giving back to society, Dr. Bella Bello Bitugu, a former student of the Keta Senior High Technical School (KETASCO) and currently the Director of Sports of the Sports Directorate, University of Ghana Legon has fulfilled a long desire of making a significant contribution to his alma mater with the official commissioning of a sports court named after him (Dr. Bitugu Multipurpose Sports Court) at Keta, Volta region on Friday, 22nd March, 2019.

A 1983 graduate of KETASCO, Dr. Bitugu is the current Chairman of The International Scientific Network for Sport for Development and Peace. He has served and continues to serve in various international roles as an academic (University of Innsbruck, Applied University of Kufstein, University of Krems an der Donau, all in Austria). He also worked and continues to work as an expert and consultant for the UN, Africa Union, the Commonwealth, UEFA, FIFA, European Union, the Austrian Government, the Government of Ghana and selected African and European NGOs and institutions.

A role model for sports and education, especially for the youth, Dr. Bella has had a passion to come back to his roots and give back to the society that helped shape his early beginnings.

This was a crowning moment of years of hard work and perseverance.

The multipurpose court is first of its kind in Ghana for a second cycle institution in terms of size, purpose and funding worth an estimated GH 167,000.

Dr. Bitugu Multipurpose Sports Court was constructed with funds from the Austrian Ministry of Sports, supported by the 1976 KETASCO Year Group, businessman and philanthropist Dr. Dan Mckorley (Macdan), Brigadier-General Dr. Chris Agbeka, Dr. Saviour Badohu and other individuals from the 76 and 83 Old Student Unions, among others.

Welcoming dignitaries, chiefs, students and staff of the school, the headmaster of Keta Secondary School Mr. Charles Agbakey expressed his gratitude to all who had contributed to the success of the project.

“I want to express our sincere gratitude to Dr. Bella and all other contributors who made sure that this project did not stall,” he said.

The project coordinator Rev. Herbert Nuworkpor, could not hide his elation at the completion of the project having spent much time and energy on it. He declared, at long last the battle has ended!!!!

“At long last the battle is over and Ketasco has overcome an infrastructural deficit. The project was made much bigger than originally projected which meant more funds were required.

At the official commissioning ceremony, it was revealed to the admiration of all that the court had been named after Dr. Bella Bello Bitugu.

Dr. Bitugu played a pioneering role in the construction of the court, directly and indirectly sourcing for the necessary funding for the project.

It was announced that the Ministry of Sports Austria had contributed about 80 per cent of the total cost of the project while some groups and individuals had also made some contributions whose names are acknowledged on the official plaque in front of the court.

Dr. Bella rolled back the years and told the gathering about his early beginnings at Keta.

“I was once here at Ketasco. In house 1, Quao House…Sports is supposed to bring people together and create a holistic and well fashioned person for tolerance, understanding, time management, focus and perseverance,…qualities hardly taught in the classroom” he said to wild applause from the student body.

He continued, “Ketasco has made me who I am today. I started by contributing in various forms to the school including books, internet, sports kits etc. I think we should give back to where we came from. I want to say thank you to my juniors and seniors, teachers and everyone.”

“I am here to tell you that the court is ready to be used. I am very happy and this journey was a very long journey. This was a struggle. I see this as another favour from our God. Please note also that schools around as well as the community also have the right to use the court. The school management should design a procedure for outsiders to have easy access to the court.”

Spurred on by their latest infrastructural addition, some students of KETASCO took to the court to showcase their skills in a special handball contest.

Dr. Bitugu urged them to “Become the champions of basketball, volleyball, handball, netball, tennis and allow others from outside to use the court so Keta becomes a base to showcase Development through Sports…

And he had a special message to the Austrian Ministry of Sports with whose support the project materialized.

“I want to thank the Austrian Ministry of Sports, the Austrian Government and VIDC, Vienna and all the people involved in getting us here,” he said.

The Dr. Bitugu Multipurpose Sports Court is well equipped to host the major indoor events such as basketball, handball, volleyball, badminton, table tennis among others.

The entire South Zone Schools and Colleges Sports Association and Volta Region stand to benefit from the use of the facility.

It appears the commissioning of the facility has come at the right time to solve a major infrastructural deficit and hundreds if not thousands of school children would benefit from the use of the Dr. Bitugu Multipurpose Sports Court well into the near future.