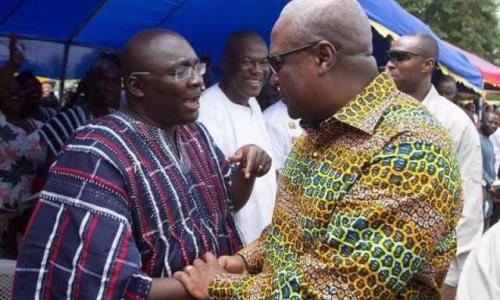 Former President John Dramani Mahama has suggested that the NPP government’s claims that it is managing the economy effectively are merely propaganda, insisting that the current administration’s ‘lies’ will be exposed by the realities of the lives of Ghanaians.

Mr. Mahama, in a brief speech at the end of a public lecture on the state of Ghana’s economy, touted his government’s achievements during their tenure, adding that the NDC had capable people managing the economy.

Mahama also mounted a strong defence of his former appointees, some of whom addressed the event earlier on Thursday.

They included former deputy Finance Minister, Mr. Cassiel Ato Forson; Madam Mona Quartey;  Former Energy Minister, John Jinapor,  and Ketu South MP,  Fiifi Kwetey who all challenged the proclamations made about the state of the country’s economy by members of the Economic Management Team, including the Vice-President Dr. Mahamudu Bawumia on Wednesday.

Giving the vote of thanks as the leader of the NDC, Mr. Mahama reiterated comments he made last year while addressing delegates of the NDC in the Northern Region, during his campaign to lead the NDC into elections 2020.

He said; “You can do all the lies and  the propaganda of the economy you like, the reality of the people’s lives will expose you.”

Mr. Adongo said this while commenting on Ghana’s current economic challenges at the event.

“The country you left  in safe hands is about to enter the international lottery. The country at this point in time is at a cross roads. We are confronted with a very severe fiscal environment that  is creating a quagmire for us.”

“The IMF at a point got fed up with us.  We had come to a point where we have left the IMF without achieving the objectives of the  IMF programme. As a matter of fact the IMF at a point got tired of us … The risk of it all is that the managers of the economy do not seem to know where we are and that is a bigger problem,” Mr. Adongo said at the party’s public lecture.

In view of these challenges, Mr. Adongo expressed the hope that the National Democratic Congress (NDC) will return to save Ghana “from the mess.”

According to him, the constant and persistent fall of the Ghana cedi must be attributed to what he terms misguided comments by Dr. Mahamudu Bawumia.

Speaking at the NDC public lecture on Ghana’s economy, Ato Forson accused Dr. Bawumia of falsifying facts and figures, insisting that any time Dr. Bawumia makes a speech on the economy, the local currency depreciates.

He insisted that the only viable way to save the cedi is for President Akufo-Addo to gag the Chairman of the Economic Management Team, Dr. Bawumia.

“I will urge the President to restrain his Vice President because anytime he speaks the currency moves. You heard him talk about the likes of the judiciary and the court systems. What has that got to do with the economic management team? He had nothing to say. He was just playing with numbers. And again, you know him and his credentials of lying with numbers.You could see lies. Our worst is better than your best and you say ‘boot for boot’? This one is more like boot for chalewote”.