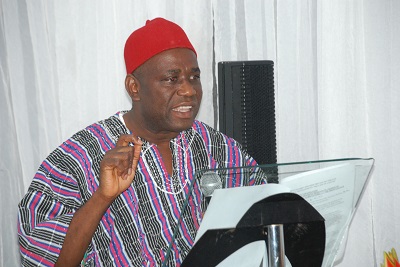 The cashew industry is expected to fetch the nation US$ 2.5 billion in the next five years, Mr Augustine Collins Ntim, a Deputy Minister of Local Government and Rural Development, has said.

He said the government has devoted GHȼ 1 billion towards the establishment of the Tree Crop Development Authority that would regulate the cashew industry and revamp that sector to contribute significantly to the country’s Gross Domestic Product (GDP).

Mr Ntim, who is responsible for Rural Economic Development and Agriculture, directed the Metropolitan, Municipal and District Assemblies (MMDAs) to raise the targeted 100,000 cashew seedlings under the Planting for Export and Rural Development (PERD) programme to meet the target.

The cashew seedlings would be supplied to registered farmers under the PERD programme free of charge for plantation.

He said the PERD has come to stay and that government is contemplating on engaging unemployed youth to plant the cashew seedlings for farmers.

Interacting with the Heads of Department (HODs) and staff of the Pru East District Assembly at Yeji in the Bono East Region, the Deputy Minister said the successful implementation of the Planting for Food and Jobs (PfFJs) and the PERD programmes depended mostly on the MMDAs.

He said the PERD, PfFJs and other social intervention programmes rolled out by government were all geared towards job creation and poverty reduction, and directed the assemblies to intensify educational campaigns for more farmers and Ghanaians to register and benefit.

Mr Ntim said documentation and reliable data collection are essential as they were key index in measuring the impact and success of the PfFJs programmes and called on the Assemblies to be awakened to improve data collection.

He called for effective collaboration between Departments and Agencies within the MMDAs towards the implementation of the PfFJs and PERD to enable the government to achieve desirable results.

Mr Ntim said the PfFJs and the PERD has huge potential for job creation and reduce rural poverty to spur rapid socio-economic growth and development and advised Ghanaians to embrace and support those programmes.

He said the government is ready to provide agriculture inputs and equipment to expand the scope of the programmes; and the MMDAs were thus required to register more farmers and make the programmes attractive for the unemployed youth to join.

Mr Joshua Kwaku Abonkrah, the Pru East District Chief Executive, said access to farm lands is very difficult in the area due to chieftaincy disputes and land litigation and this is impeding the implementation of the PERD and the PfFJs in the District.

He said many farmers in the area had registered under the PERD and desired to go into commercial plantation of cashew but access to farmlands is a major challenge.

Mr Abonkrah advised traditional authorities to bury their differences and release lands to enable interested farmers to engage in the programmes.