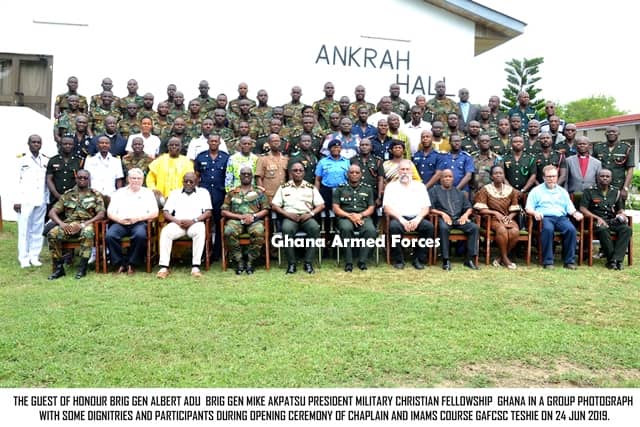 The first ever Regional International Association of Evangelical Chaplains (IAEC) Basic Course for Chaplains and Imams has ended at the Ghana Armed Forces Command and Staff College (GAFCSC), Teshie.

The course was organised by the Directorate of Religious Affairs (DRA) together with the Ghana Military Christian Fellowship (GMCF), and in conjunction with the IAEC of the United States of America (USA).

The Guest of Honour, the Commandant, Ghana Armed Forces Command and Staff College (GAFCSC), Rear Admiral Moses Beick-Baffour, in his speech, noted that the aim of the course was to equip participants to perform religious support duties in their respective units.

It is also to support the commanders to accomplish their missions in ensuring that the needs of the military personnel, civilian employees and their families were achieved.

He said USA and Ghana have had a long-standing relationship, which had been beneficial.

“I believe it is in the spirit of such magnificent collaboration that this conference has been organized to equip participants with the necessary tools that can help them”, he added.

Rear Admiral Beick-Baffour noted that even though the duration of the course was short, it came with many vital topics such as: A look at Chaplaincy in general, Commander-Chaplain Relationship, Pluralism, Operational Stress as well as other inspiring topics, which had enriched participant capacities in dealing with the psycho-social and spiritual challenges in the Armed Forces and Sister Security Services.

For his part, the President of the Ghana Military Christian Fellowship (GMCF), Brigadier General Mike Akpastu, noted that the vision of the Fellowship was to let every person in the Armed Forces and Sister Security Services worldwide hear the Good News of Christ.

He mentioned that their mission was to assist in the development of Christian Leaders in the Armed Forces and all uniformed personnel across the world.

He, therefore, entreated all uniform personnel and civilians to come on board in order to win souls for Christ.

He added that the Fellowship is an intercessory Prayer Force for Ghana and all uniform personnel of the country.

Brig Gen Akpastu expressed his profound gratitude to the Chief of Defence Staff, Lt Gen Obed Boamah Akwa, for his keen support and various forms of assistance which he has given to the fellowship, which led to its revival and also for the successful conduct of the first ever Regional International Association of Evangelical Chaplains Basic Course in Ghana.

A retired member of the United States Marine Corps and the Team Leader of IAEC, USA, Colonel Chester Arnold, in his speech said all uniformed services, which was a noble profession were called to protect and ensure the security of their countries so that people in the society could live in peace.

Participants were drawn from the Ghana Armed Forces and all Sister Security Services in Ghana as well as Nigerian and Gambia. Certificates were given to the participants by the organisers.