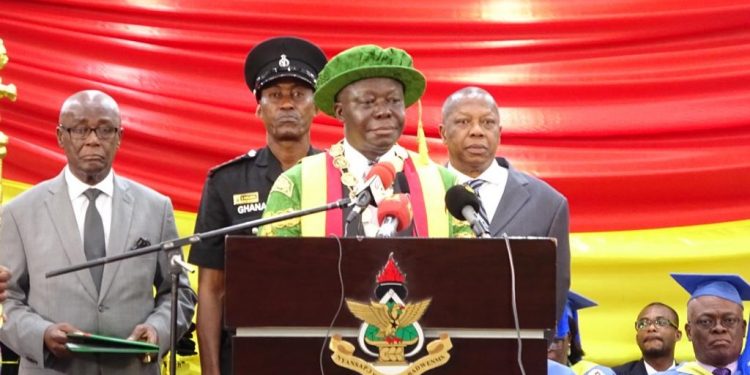 The Chancellor of Kwame Nkrumah University of Science and Technology (KNUST), Otumfuo Osei Tutu II says the committee looking into disturbances that occurred at KNUST has completed its probe into the incident.

He said the committee has presented its final report to him.

According to the Asantehene, he is still studying the report and will comment on it after making necessary consultations.

Speaking during a graduation ceremony at KNUST over the weekend, he noted that the incident which saw a violent demonstration by students with properties valued at over GHc1.6 million being destroyed, tarnished the image of the university and such must not reoccur.

“One of my biggest concerns was the poor public image the university received as a result of the demonstration on the 22nd of October, 2018. We have taken stock and have learnt some useful lessons from that incident. During my address in February 2019 at the special congregation of the University, I did indicate that I was going to set up a committee to investigate the matter,” the Asantehene said.

Otumfuo Osei Tutu II, who is the Chancellor of the University said, “The committee was inaugurated on 14th February 2019. I am happy to announce to you that the committee has completed its work and submitted it to me. I am studying the report and will comment on the findings of the committee in due course after due consultations. As we forge ahead as a university, I want to charge the council and the management to do whatever possible to reposition the university to fulfil its mandate as one of the top ten universities in Africa”.

Students of KNUST on 22nd October, 2018 led by the Students Representative Council, SRC embarked on a demonstration which was described as a peaceful one but later turned out to be violent and led to the destruction of some properties.

The Authorities of the university after estimation valued the cost of damages at over GHC 1.6 million.

Among the factors that led to the demonstration by students included conversion of single-sex halls (University, Unity and Africa halls) into mixed halls.

Some students also said they were being brutalized by the university’s internal security; a move they say triggered the demonstration.

The students also raised objections about the celebration of all hall weeks within one week, consolidation of all students’ accounts among others.

Some students as part of the demonstration called for some principal officers of the university to be sacked.

The Asantehene who doubles as the Chancellor of KNUST on 14th February 2019 inaugurated a  committee that was charged to probe the disturbances to come up with recommendations.

The Dean of students of KNUST, Prof. William Akanwariak Gariba resigned shortly after the disturbances.

10 things to expect from the 2019 mid-year budget review

10 things to expect from the 2019 mid-year budget review