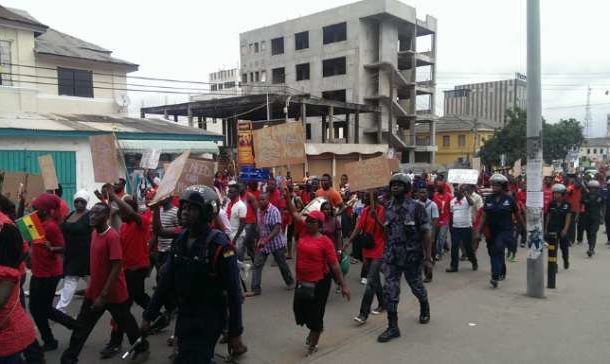 Residents of Mataheko and new Prampram, suburbs of Ningo Prampram on Friday demonstrated against the Railways Ministry for what they term poor access into the community.

According to the residents, the railway lines have blocked all major access routes into the community.

A resident who was complaining about the challenge said: “Look at this vast area, we do not have access route crossing to this side. The only thing we need is access to school. We are living in hell here. We are pleading with the President to listen to us. If we demonstrate and they do not listen to us, we will take our own decision. That is what we will do.”

Another said although the Railway Ministry had been informed about the situation, no action had been taken.

“We wrote a letter from the DCE office to the Railway Ministry and the response that came was that they will work on the situation but from that time till now when you call the company they say they are not going to do anything so the situation is becoming a challenge.”

“We are demonstrating over our access route to our various houses. It is very difficult for us. Since they started constructing the railway, we have done what we are supposed to do to have our access routes but the government is still not minding us,” another said.

“We are pleading with the President. When it rains it is very terrible. We will take our own decision if we demonstrate and they do not listen to us,” one other resident said.

The residents had earlier demonstrated over poor roads a few weeks ago where they burnt tyres and blocked roads causing gridlock on that stretch.

The District Chief Executive ( DCE) for the area, Jonathan Nii Teye Doku subsequently indicated that residents have the rights to embark on a demonstration exercise just like any other Ghanaian but should not block roads in the process.