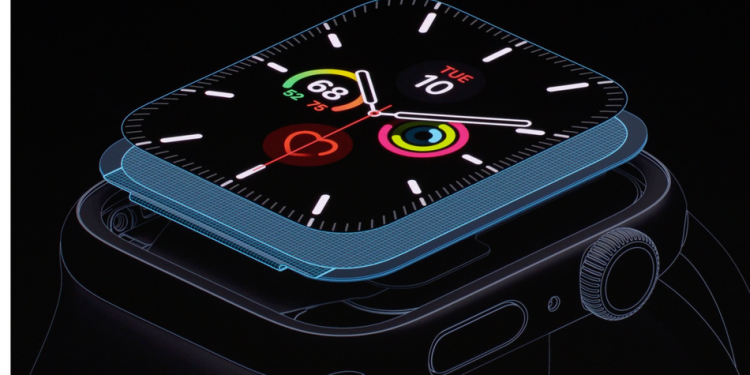 The watch’s most significant new feature is an “always on” Retina display, which means that you can look at the time, or whatever is on your home screen, without having to raise your wrist or tap the screen. This answers criticism that one of the Apple Watch’s main failings was as a, well, watch.

Apple is claiming that the new “always on” display won’t drain battery life — it’ll still get 18 hours per charge.

The other new features come in the realm of safety and navigation. The Apple Watch will now have a built-in compass, which will tell you which direction you’re facing in third-party apps, maps, and in a separate compass app.

Next, cellular models will come with international SOS calls to emergency services. That means you can call 911 from your watch, anywhere in the world (provided you have the pricier cellular model).

The Series 5 is also getting some blinged up options. For the first time, the Apple Watch will come in titanium—a “natural brushed titanium” at that! It will also come in a white ceramic, plus it’s getting some new designs from Nike and Hermès, including one pretty hawt black stainless steel and leather band Hermès model. There’s no word yet on the prices for these aesthetic upgrades.

The new watches will take advantage of Watch OS 6, which will include new watch faces, an app store accessible from the watch itself, and new health features (like period tracking and noise cancelation).

The more significant changes to Apple Watch came last fall, with the release of the Apple Watch Series 4. That was the biggest redesign of the device since its inception, allowing for more sensitive tracking, a bigger screen, and robust health features, including the ability to take an Electrocardiogram.

7 signs your job is ruining your relationship

Sam Smith wants to be referred to as ‘they’ not ‘he’

Sam Smith wants to be referred to as ‘they’ not ‘he’