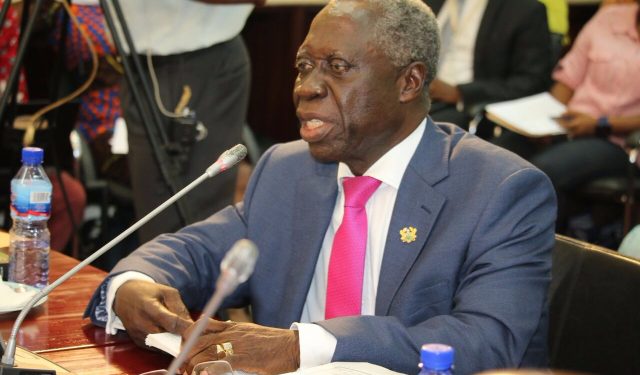 Senior Minister, Yaw Osafo Maafo says Ghanaians have a role to play in ending corruption in the country.

He said despite the fine laws in Ghana, it will take a change of attitudes and mindset to end corruption.

The Senior Minister spoke at a forum in Accra.

“Our current state of development is a reflection of our values, mindset, priorities, and work ethics as a people. We need a mindset change to achieve Ghana Beyond Aid,” he said.

He expressed worry over what he said was the careless use of resources which is one other way through which Ghanaians promote corruption.

Yaw Osafo Maafo stated, “You leave your office and leave all the air conditions and lights on. The office is paying the bill. Once power is being used, somebody has to pay. So you are undermining the whole system. Transparency and accountability results in Ghana free from all forms of corruption. Corruption obviously takes a big toll on our resources because it runs through the system and we have to fight and fight it hard.”

Many have criticized successive governments of failing to win the fight against corruption in the country which is estimated to cost the nation millions of cedis annually.

Some anti-corruption campaigners have occasionally complained about the increasing rate of corruption in the country with some blaming the President and his appointees for the surge.

Anti-corruption crusader and former Executive Director of the Ghana Integrity Initiative Vitus Azeem recently slammed Nana Addo over what he says is the President’s gross failure to tackle the menace.

He indicated that the Akufo Addo government tops the list as the administration with the most cases of corruption.

“People voted because the President had promised that he was going to tackle corruption head on, so he raised our expectation.  So, in my observation, he has failed because he may be personally incorruptible but he appoints people who do things wrongly but he has not done anything about it.  So, he cannot be exonerated from blame. I think he has failed,“ he declared.

The Special Prosecutor Martin Amidu who the government has been confident about to deal with the canker has also complained that the actions of government appointees and heads of institutions are one of the impediments to the fight against corruption.