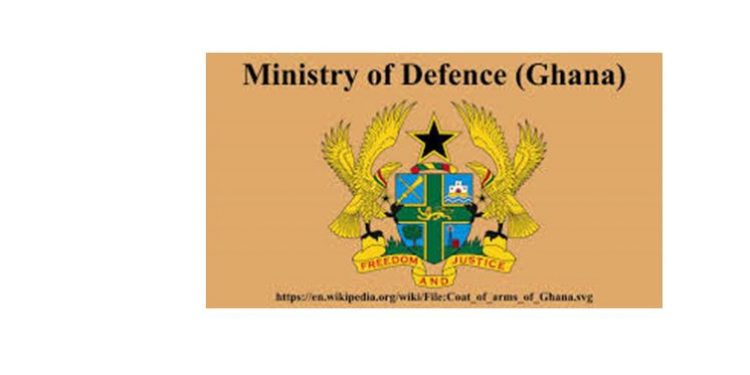 The Ministry of Defense on August 20, 2019 signed a contract with Markin Hills Ltd and CTT Consult, for the commencement of works on a major housing project in Adomorobe, in the Oyibi district of the Greater Accra Region.

Chairing the function was the Deputy Minister of Defense Major (RTD) Derek Oduro.

The first phase of the project which spans 60-acres will have housing units, a Hospital, a School, a Police Post, as well as an Entertainment and Commercial Centers; all within the gated community.

By the signing of the contract, the 48 Engineers Regiment is to commence the fencing of the first site of 60-acres land.

The second site is also a 60-acre land; bringing total land size to 120acres. Before the signing of the contract, the Ministry of Defense wrote officially to the Lands Commission to ascertain ownership of the lands to be developed.

A response from the Lands Commission with reference number LRDGAPOTS335420190 dated 16th August 2019, confirmed that the land title certificates TD 6251 & TD 7778 belongs to the Executive Chairman of Markin Hills Ltd; thus, confirming the legitimacy and validity of Markin Hills Ltd having received full consent to commence work in line with the Building, Environmental and Fire Permits received.

In an interview with the Managing Director of Markin Hills Ltd. Ing. Amos Amankwah, he indicated that the 48 Engineers Regiment has a lot of expertise currently being underutilized.

He said the collaboration and synergy is geared towards not only generating funds for the military, but also speed up construction, as well as ensure a quality output for the benefit of society.

He advised people in the catchment area to give the military maximum cooperation as they undertake their lawful duty of construction. He Further stated that Markin Hills Ltd and CTT Consult have packages in other countries and the output of this collaboration will encourage them to engage the 48 Engineers Regiment in other countries in addition to other projects in Ghana.

As far back as the year 2011 the lands were purchased, and registered with Land Title Certificates issued on 26th March 2013 by the Land Title Registry.

Upon certified designs by accredited Architects and Engineers the drawings were approved in 2013; FIRE PERMIT dated 26th August 2015 was then issued.

A Scoping notice was therefore issued In the Daily Graphic on Thursday 29th December 2016.

BUILDING PERMIT No. 000017 from the La – Nkwantanang Madina Municipal Assembly was issued on 11th May 2016 in relation to this project.

All drawings and necessary sensitization and correspondence with the Police and Assembly have been undertaken.

On February 26 2019, the Survey and Mapping Department of the Lands Commission went to reconfirm the physical plotting of the lands that had previously been done in 2011/2012; when the lands where purchased.

The above was reconfirmed by a joint survey with the Survey Department, the 360 Surveys & Engineering Limited, and the 48 Engineers Regiment, using a Hi-Target RTK GPS surveying instrument set with serial number VS V08100008 and VSV08100007 to reconfirm the work of the National Survey Authority. Though the Land Title Certificates and drawing were ready in 2013, the company had to wait for final permits, and the importation of equipment to start work.

Final reconnaissance/reconfirmation was carried out on 30th August, 2019; with all parties in the construction, including survey personnel present.

Markin Hills Ltd which is also building a tertiary institute at Katamanso in Accra, and assisting The Church of Christ (SM) establish a tertiary institution in Cape Coast (currently under construction), will replicate its estate development in other regions of the country; as well as in the West African sub-region.

What do we do with South Africa? A critical engagement [Article]