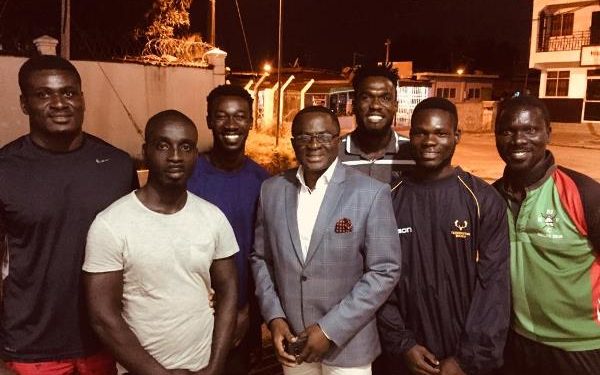 GOC President Ben Nunoo-Mensah (Middle in glasses) with some members of the Ghana Rugby Team.

The President of Ghana Olympic Committee (GOC), Ben Nunoo-Mensah, has paid a surprise visit to members of Ghana Rugby team in their camp where the team is preparing for Olympic Qualifiers.

Ghana Rugby is a full member of both World Rugby and Rugby Africa in Ghana-West Africa, with Herbert Mensah as its President.

The Ghana Rugby Football Union (GRFU) is making preparations towards a Rugby Africa Cup tournament in Botswana in November, and also for the Men’s 7s Olympic Qualifier that will be played in South Africa at the Bosman Stadium in Johannesburg between 8th and 9th November 2019.

The Ghana National Men’s Sevens Team, the Ghana Eagles, first entered the Rugby Africa Sevens arena in 2017 when it was ranked in the sevens line-up for the first time in Kampala, Uganda.

In its second participation in Tunisia in 2018, it managed to reach the Bronze Cup finals where the Ghana Eagles were beaten by Namibia.