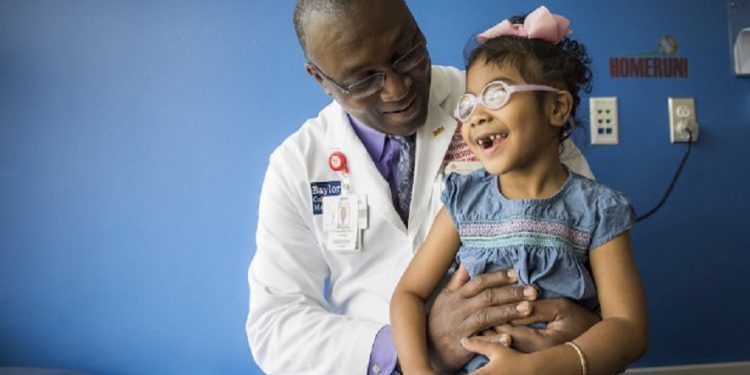 He came to international attention when he led a team of medical practitioners to perform surgery on a baby in-utero in a Texas hospital in 2016 and now Oluyinka O. Olutoye, MD, PhD, has been appointed Surgeon-In-Chief at Nationwide Children’s Hospital in the U.S.

Olutoye co-led a team of 21 doctors that removed a sacrococcygeal teratoma, a large tumor that grows on the tailbone of a fetus, and then returned the 23-week-old fetus to the mother’s womb to world acclaim.

For the surgery, the mother and fetus were given general anaesthesia and the part of the fetus’ body where the tumor was attached was taken out of the uterus.

Surgeons then removed as much of the mass as possible before returning the fetus to the womb. The team continued to monitor the mother over the course of her pregnancy to ensure that no further problems occurred until she delivered at 36 weeks.

At his new base, Dr. Olutoye will lead one of the largest children’s hospital surgery departments in the world. Through his leadership of 11 surgical departments, Dr. Olutoye will work to advance Nationwide Children’s common mission, philosophy and approach to excellence in patient care, dedication to outstanding clinical outcomes, commitment to academic excellence and education of the next generation of leaders in children’s surgery.

He will also be appointed professor and the E. Thomas Boles chair of pediatric surgery at The Ohio State University (OSU) College of Medicine. Dr. Olutoye will serve as the primary surgical liaison between Nationwide Children’s and the OSU College of Medicine, according to nationwidechildrens.org.

For Richard J. Brilli, MD, chief medical officer at Nationwide Children’s Hospital, the appointment of Dr. Olutoye was a no-brainer given his stellar record and high qualification.

“We are tremendously delighted to welcome Dr. Olutoye to Nationwide Children’s Hospital to further elevate the visibility and reputation of one of the best overall children’s surgical programs in the country that, through its clinical care and research, is forging the future of children’s surgery,” he noted adding “having a world-renowned fetal and pediatric surgeon join our leadership team will further advance Nationwide Children’s commitment to establishing a preeminent fetal surgery program.”

As a pediatric and fetal surgeon, Dr. Olutoye brings specialized clinical expertise in fetal and neonatal surgery. Fetal surgeons work closely with obstetricians and maternal-fetal medicine specialists to provide exceptional care for babies who need surgery in-utero and to improve outcomes for a range of conditions such as congenital diaphragmatic hernia, spina bifida and other congenital anomalies.

Prior to joining Nationwide Children’s, Dr. Olutoye served as co-director of the Fetal Center and the immediate past president of the medical staff at Texas Children’s Hospital.

At Baylor College of Medicine, also in Houston, TX, he was a tenured Professor of Surgery, Obstetrics & Gynecology, and Pediatrics, and chair of the Faculty Senate.

In addition to his clinical expertise, Dr. Olutoye leads an established research program focused on the role of the inflammatory response in scarless fetal wound healing, in-utero correction of severe congenital malformations, and the early detection of necrotizing enterocolitis in preterm infants.

“Nationwide Children’s Hospital is respected nationally for building outstanding integrated research and clinical programs, its seminal work in healthcare quality and patient safety, and as a leader in improving pediatric health outcomes.

“This is a very opportune time to be joining the organization as we build upon the already impressive success of our surgical services to help children around the country and increasingly around the world. I look forward to the privilege of leading and collaborating with this team in the next phase of our journey.”

He might be chalking feats globally but it all began in Africa, specifically Nigeria, where he earned his medical degree from Obafemi Awolowo University in Ile-Ife, Nigeria, in 1988. He followed it with his PhD in anatomy from Virginia Commonwealth University in Richmond, VA, in 1996.

He completed his residency in general surgery at the Medical College of Virginia Hospitals, Virginia Commonwealth University, and his fellowship in pediatric surgery at The Children’s Hospital of Philadelphia and the University of Pennsylvania School of Medicine in Philadelphia, Pa.