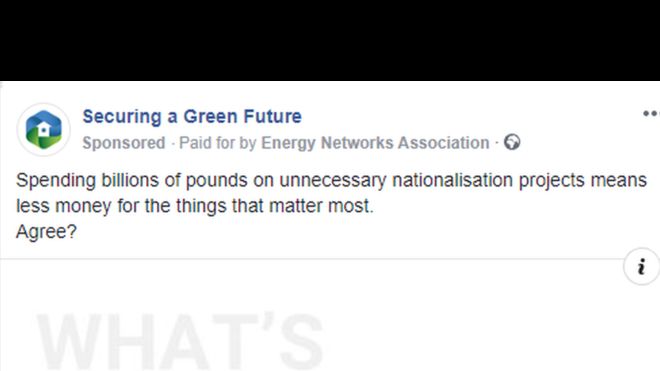 An energy industry lobby group has been buying adverts on Facebook attacking Labour’s nationalization policies ahead of the general election.

The Energy Networks Association has so far spent £3,215 on 130 ads on the social media site.

The lobby group has registered with Facebook as a political advertiser and says it is in discussions with the Electoral Commission about whether it needs to register as a non-party campaigner.

The trade group, whose members include National Grid and Scottish and Southern Energy, has bought adverts for a campaign called Securing A Green Future.

The ads include messages such as “What matters more to you and your family? NHS spending or nationalization of the energy networks?”

A Facebook user who had seen one of the adverts sent it to the BBC. The man said the ad “seeks to cast a negative light on the Labour pledge to nationalize industries”.

Some have warned these plans would cost too much. But John McDonnell, the shadow chancellor, has said that the party’s proposals would be cost-neutral as the companies’ profits would cover the cost of borrowing needed to finance it.

The user who sent in the ad told the BBC it “seems like a targeted effort from energy suppliers who stand to lose assets + profits with nationalization, but who’s to say”.

When he clicked on a “why am I seeing this ad” message, it appeared to be targeted at people aged 65 and over living in London.

A spokesman for the Energy Networks Association said the Securing Our Green Future campaign was “a new long-term project that aims to raise awareness of the vital role energy networks have to play in helping the UK reach its goals”.

But he conceded that references to the nationalization of energy networks were about Labour Party policies.

Commenting on the ad, a Labour spokesperson told the BBC: “Instead of investing profits into upgrading the grid to tackle the climate emergency and lowering people’s energy bills, these private energy companies have been siphoning off money to shareholders and wasting bill payers’ money on targeted ads.

“These companies are afraid of real change with Labour and we welcome their opposition.”

The Electoral Commission says non-party organizations such as the Energy Networks Association have to register with it if they plan to spend more than £20,000 in England or £10,000 in Scotland, Wales or Northern Ireland during the course of a campaign.

A spokesperson said, “we advised them earlier this year that if an election is called and they think that their spending is likely to reach these values, it would be necessary to register”.

The Energy Networks Association says it is very happy to register with the Electoral Commission. A spokesman said the net-zero carbon target was an important issue and it was committed to having a debate in the most transparent way possible.

A number of non-party groups have been buying Facebook ads, from anti-Labour groups such as the Campaign against Corbynism to the pro-remain Best for Britain.

But the Energy Networks Association appears to be the first mainstream trade association to launch Facebook adverts during the election campaign.