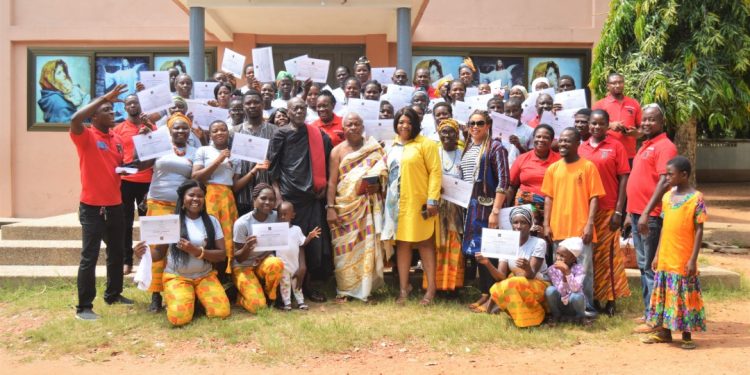 A total of 47 adult learners were graduated over the weekend from Engage Now Africa (ENA’s) adult literacy program in some four communities in the Central Tongu District of the Volta Region.

The communities that benefited from the adult literacy program were; Adidome, Amelorkope, Tsetsekpo, and Avakpodome.

The Country Director of Engage Now Africa, Cecelia Amankwah said ENA is in partnership with Alma House to ensure that no one is left behind as far as education is concerned.

She added that going through adult education is not an easy task but since the learners were able to sail through; “it means that there’s nothing impossible on this planet earth if there’s perseverance, determination and hard work attached to it.” 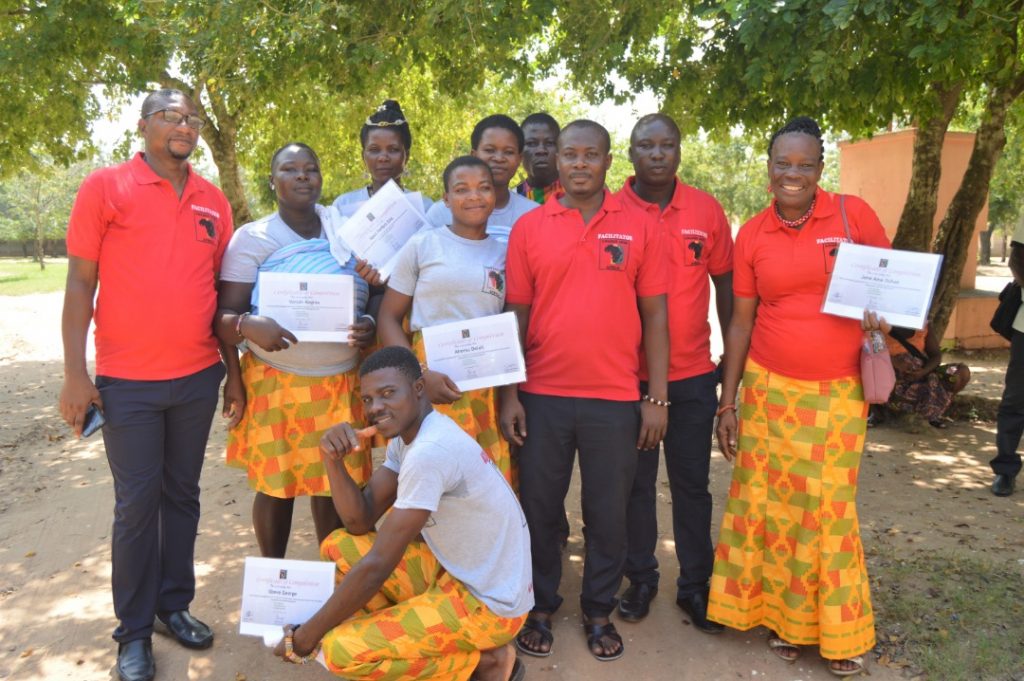 She urged the learners to put whatever they were taught into practice because the aim of ENA is to improve their lives and that of their families.

She encouraged the new graduates to keep helping each other, work as a group and also to avoid being envious of anyone who is doing so well in the group but rather let it serve as a motivation for them to also keep trying so that at the end they can also become perfect.

Stella Charles, Chief Executive Officer (CEO) of Alma House said she was impressed with the things the learners have demonstrated and said the love and unity among them show that they are well equipped to handle the things they have learnt and put it into something meaningful. 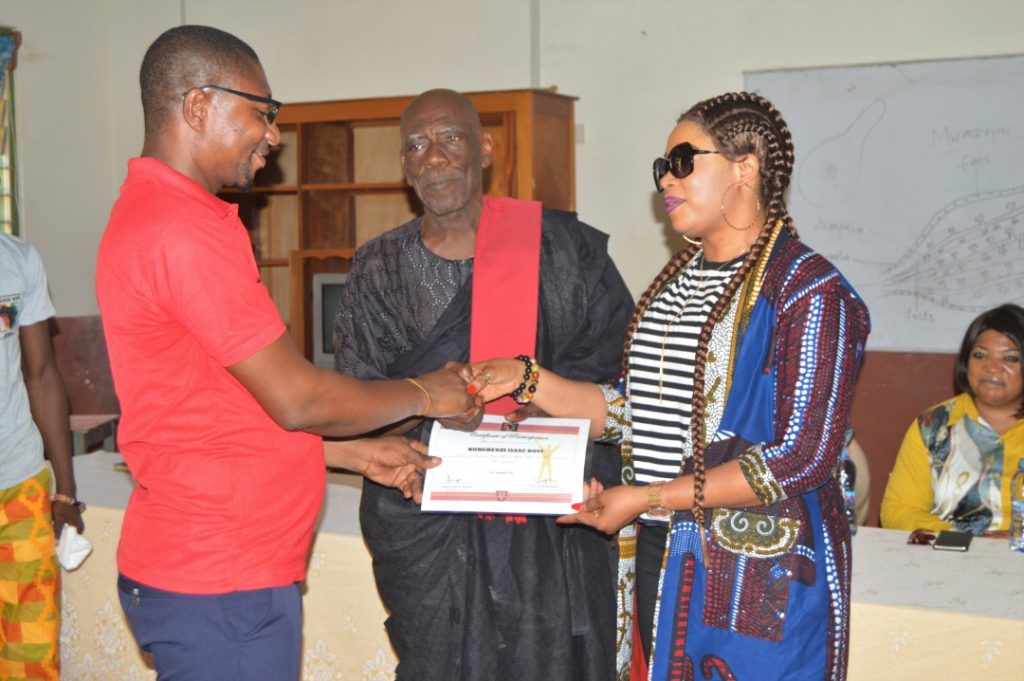 Togbe Kwasinyi Agyeman IV, Chief of Adidome who doubled as the Chairman for the event, lauded ENA for the support they are giving the elderly persons in the various communities.

He entreated the learners to cherish the things they were thought and use it to better their lives because as far as ENA is concerned, they are in to help them grow in all aspects of their lives.

Samuel Gomashie, The Adidome Branch Director of Business Advisory Center (BAC) said his outfit with the National Board for Small-Scale Industries (NBSSI) as the national Implementing Entity is there to provide services to micro, small and medium scale entrepreneurs through training, counselling among others.

Francis K. Wama, the Volta Regional Literacy Supervisor for ENA was excited that the program was a success. 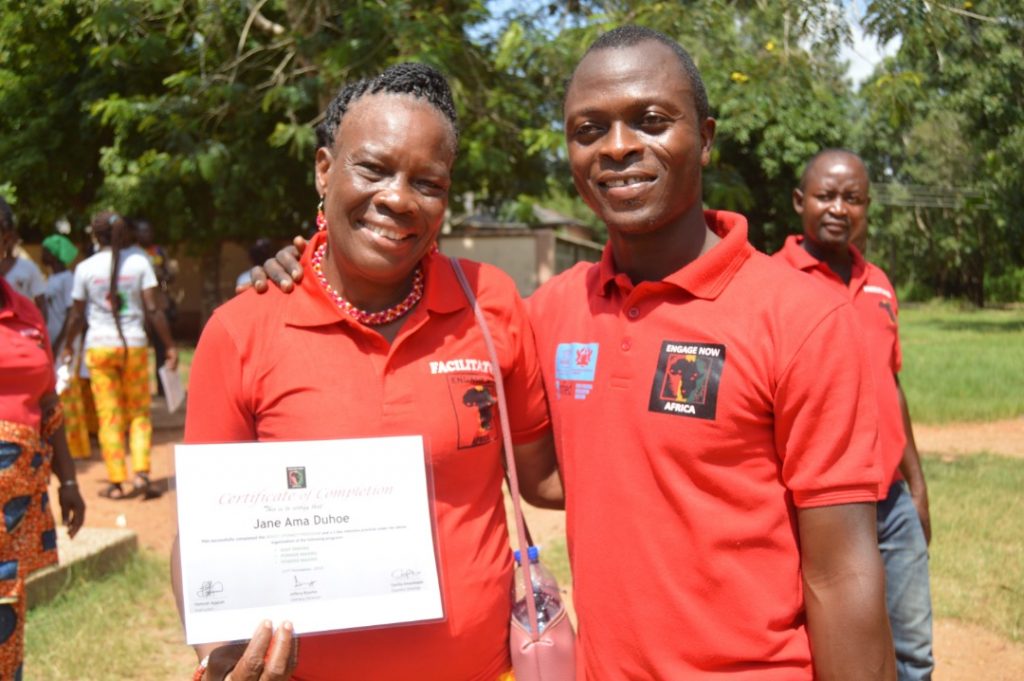 He said it has not been easy to organize such programs in the communities, especially getting facilitators to volunteer.

He thanked the Business Advisory Centre for coming on board to assist the learners to enhance their businesses.

He called on the community leaders to support ENA to expand the literacy program.

Some of the learners shared their testimonies about the benefits they have acquired from Engage Now Afraid (ENA’s) adult literacy program.

One of them, Eunice Ahortor said she was taught how to repackage her oil business and this has increased her sales in the market “I thank ENA”, she added.

Janet Ama Duho said “Initially I do not understand the importance of saving but for the past two years of receiving training from ENA’s adult literacy program, Daily savings is now part of me, God bless ENA.”

Apart from learning how to read and write, the 47 adults were also trained in batik tie and die, bead making, liquid soap, powder among other things and certificates were awarded to them as well.