Ghanaian villager who came to Japan: ‘The significant money tray’ 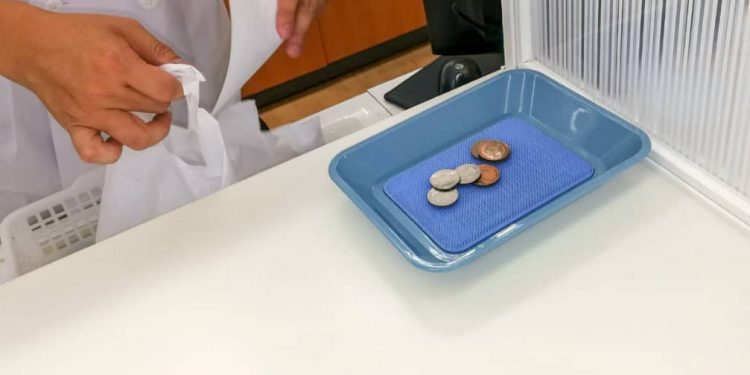 The look on my face when I put the money on the tray was one that suggested I had had a poor reception judging from where I came from.

Back home in my home country Ghana, it was courteous a way and even prestigious to receive money with hands after a deal has been completed; it showed a good rapport between the customer and the business owner or simply it exhibited appreciation for a completed business deal or purchase.

Conversely, when I had to put the ¥27,000 (equivalent to 1,080 cedis) on the money tray as evidence of purchase of my brown S-Tech bicycle, my first thought was insecurity, secondly  a feeling of unappreciation, knowing if I were in Ghana, even the palm oil seller, the charcoal and the ‘koobi’ sellers will all receive my money heartily with their hands whether soiled or not.

Notwithstanding if it came to the worse and the seller was eating with her fingers, from the courteous upbringing she has had, she will put the soiled right palm under the left and receive my hard-earned money in exchange of the ‘momoni’ or charcoal I had bought, obviously to depict reciprocity in respect.

Days after that encounter, my mind kept wandering, I asked myself many questions so I could doubt their courtesy. I said “these Nippon people wear respect like clothes; they depict it everywhere. The elderly bows in greeting the young and the powerful bow to the less powerful and vice versa in pleasantries, so how could they not show respect by receiving money with their palms?”. I asked rhetorically.

No sooner had I spent 3 months in Japan than I understood that indeed, no respect could be greater and all respect for humans will also be fake if it was not first extended to the means of human survival and the medium of human exchange – MONEY!

Thenceforth, my title for this writing, “THE SIGNIFICANT MONEY TRAY!”

Alas, the Japanese had proved to me not with words that respect for humanity is respect for the state and respect for the state is depicted by total respect and regard for the state’s power – MONEY. As such to the Japanese, the highest paper note, a value of ¥10,000 (equivalent to 400 cedis) and their lowest coin, a value of ¥1 (the two amounts I’ve quoted do not exist in our Ghanaian notes and coins currently) are both treated the same. None is given in hands to be soiled, it is first put on the money tray, then upon checking to see if the palms pass the respectable enough test to receive the money, it is then taken and put at a further right place.

It is not surprising that in my nearly one year of living in Japan, I have never seen wet, torn, handwritten, dirty, soiled or folded money in Japan. All noted are grittily fresh and most coins sparkle if I’m not over exaggerating.

I hope this letter written with my own hands as said by Paul, the Apostle, in his epistle to the Corinthians finds the Governor of the Central Bank, the Monetary Advisory Committee, Teachers, Bankers, Financial Institutions and all individuals in my home country safe, and then sound enough to read and just maybe dream of introducing the significant money trays in Ghana.

With my little brain, I think if it is introduced, the hard-earned Ghanaian currency can be preserved the better as the yearly money used in printing new monies to replace the damaged ones will be saved.

And Oh Yes! The frequent fights among ‘trotro’ conductors and passengers may be non-existent as clean money will not be exchanged for dirty ones as change after touching some dirty palms.

Let me be quick to add that in Japan, bus conductors and taxi drivers even upon wearing white gloves that make them look like medical surgeons do not touch the hard-earned Japanese Yen with their palms, but from the money tray available in all cars.

Thank you, fellow citizens, for not agreeing with me any less.
(I AM THE GHANAIAN villager that Came to Japan)