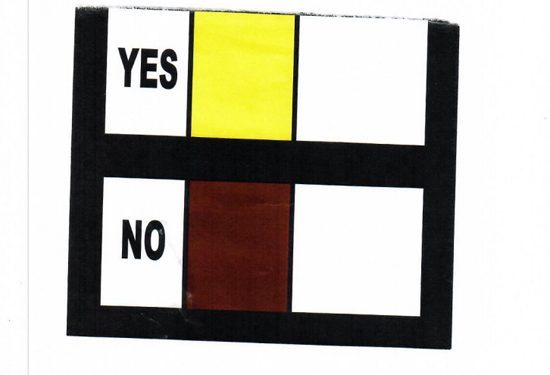 The opposition National Democratic Congress (NDC) wants Ghanaians to vote against the proposal to amend the constitution to allow political parties to participate in the District level elections.

The December 17, 2019 referendum is to decide on the proposed amendment.

A successful amendment of Article 55 (3) will mean political parties will be able to sponsor candidates for election to District Assemblies or Lower Local Government Units.

But at a press conference addressed by the NDC Chairman, Samuel Ofosu Ampofo, said a YES vote, will open district assemblies and unit committees to “the needless NDC-NPP polarization”

At the meeting held last Thursday, the NEC of the NDC affirmed our long held position that MMDCEs should be elected. We however took the view that the local government system should remain non-partisan and that individuals contest the District Assembly and Unit Committee elections on their own merit. We therefore decided to campaign for a NO vote at the referendum and to urge all Ghanaians to vote NO at the referendum. It is our well considered view, and indeed that of well meaning Ghanaians, that the needless NDC-NPP polarization at the national level should not be extended into the District Assemblies and Unit Committees, which is what will happen if we vote to make the local government system partisan.”

Two bills are seeking amendments to Articles 243(1) and 55(3) for the election of MMDCEs and introduction of political party participation in the local elections.

President Akufo-Addo during his recent Volta Region tour used his platform to urge Ghanaians to vote YES in the referendum.

This the NDC however argues that, the consequence of exporting this polarization into the District Assemblies will retard development, and “that is unhealthy for Ghana’s democracy.”

“If you will recall, last week at Akatsi in the Volta Region, President Akufo-Addo stated that he was committed to sustaining former President Rawlings’ decentralization legacy. That legacy is based on the non-partisan local government system. It is therefore imperative that we vote NO at the referendum.”

More than half of Ghanaians not aware of referendum – Afrobarometer survey

Close to 60 percent of Ghanaians say they are not aware of the upcoming referendum on December 17, a new Afrobarometer survey has indicated.

The Constitution requires a minimum 40 percent voter turnout for the referendum to be valid.

But the survey indicated that there is a risk of low voter turnout for this referendum because it will be conducted together with local government elections, which have historically attracted less than 40 percent of registered voters.

Your nutrition and healthy bones