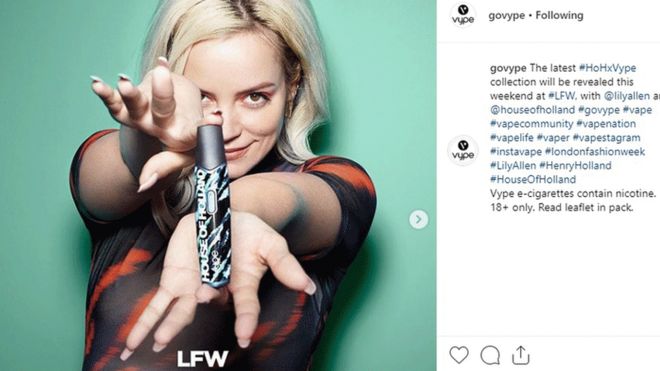 The posts showed models and celebrities such as Lily Allen holding electronic cigarettes.

The advertising of these products is banned on social media.

One of the groups that had complained said the ruling was “a huge step forward”.

“While the ASA ruling is great news, urgent policy change is needed from Facebook, Instagram and Twitter to prevent BAT and other tobacco companies from using social media to advertise their harmful products to young people around the world,” the Campaign for Tobacco-Free Kids said in a statement.

The four vaping companies under scrutiny were:

The complaint was backed by UK anti-smoking groups Action on Smoking and Health (Ash) and Stopping Tobacco Organisations and Products (Stop).

The companies were accused of promoting nicotine-containing e-cigarettes and featuring models who appeared to be under 25, which is banned under the advertising code.

In its response, British American Tobacco said its online communications “aimed to impart factual information regarding products but stopped short of direct or indirect promotion”.

The Vype Instagram account in question did not allow under-18s and clearly stated its Vype e-cigarettes contained nicotine, it said.

And it “used these platforms to interact with users when they ask questions or request information and to communicate factual information about Vype that adults vapers and smokers” wanted.

But Ash chief executive Deborah Arnott said: “The law has always been clear that any advertising of e-cigarettes online is not permitted.

“BAT’s defence that all they were doing was providing ‘information’ on social media not promoting their products has been blown out of the water.

“The ASA ruling leaves no doubt that BAT’s social media tactics for Vype were both irresponsible and unlawful and must never be repeated.”

The ASA ruled the posts must not appear again in their current form.

It told all four companies posts promoting nicotine-containing e-cigarettes “should not be made from Instagram in future” unless steps were taken to make sure they could not be viewed by under-18s and the people featured must be 25 or older.

Global Vaping Group accepted its post had been “beyond purely being factual” and admitted it was unable to verify the age of a woman shown vaping.

Attitude Vapes did not respond to the ASA’s inquiries and was told it must do so “in future”.