The Japanese ‘san’ suffix; the title that ‘ejaculates’ politeness [Article] 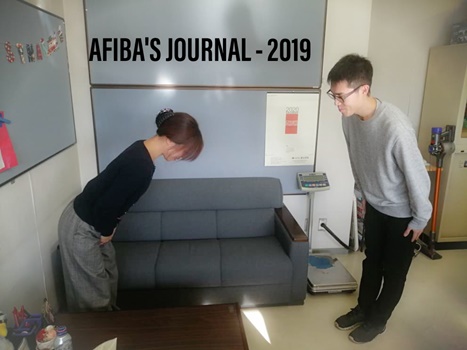 The first time I heard of the ‘san’ suffix was when I was introduced to Sakuma-san. She gladly said, “Oh, Afiba-san from Ghana” in a bow. I responded not “Afiba-san” but Afiba. She reiterated, yes “Afiba-san”.

I was uneasy for a moment because I have never liked my name to be mispronounced, yet since it was our first meeting and I didn’t want to mar the beauty of our relationship ab initio, I retorted yes “Afiba-san”.

At another time I attended an interview with my Hungarian friend, Gabby (whom I affectionately call Gabby dear).

The proprietor of the school, Sachiko-san after our introduction said: “Oh Afiba-san, you are welcome”.

The same uneasiness I had felt with Sakuma-san overshadowed me but I had to maintain my composure yet again so my employer-to-be will not think otherwise of me other than how I had presented myself to her.

After the interview, the uneasiness which started when my name was changed, heightened, (maybe I should say, I am the unexploded form of Professor Ama Ata Aidoo who walked out of a ceremony in her honour in Ghana because her name was misspelt) building into curiosity.

The uneasiness had swelled up in me that it had to gush out like the intestines of Judas Iscariot in the Akaldema field. So I asked, “Gabby dear, why did everyone call me Afiba-san when I audibly pronounce my name as Afiba Twum or simply Afiba?”

She smiled because from Budapest, Hungary, and having lived in Japan for more than 13 years, she felt the same way when she first stepped foot on the Nihong soil. Gabby then asked me, “why do you call me Gabby dear?”

I answered, “I call you so to show respect and also to emphasize our relationship”.

Being a teacher, she just knew how to explain pedagogically, so she asked again, “will you call my husband Micky dear because you respect him too?”

I looked at her again and said no, because it may be misconstrued, so I will rather call him Mr. Szabo.

Gabby then said “exactly, but see how much stress you went through to find a suitable title that depicts respect and emphasize a cordial relationship”. I nodded, yes.

She responded welcome to the Japanese “sempai, kun, chan, sensei, and san suffixes, but the most frequent you will hear is “San” – it depicts a sense of respect and cordial relationship in one.

I returned from the interview to reminisce how often I had heard those titles, but because I didn’t know they were honorary suffixes of politeness, I thought they were part of the bearer’s name.

“Senpai” was for a senior.

“Kun” was a male suffix of politeness for a child and “Chan” for a female child.

There are many characteristics I had seen about the Japanese I had written about and suggested if they were implemented in Ghana, it will have made the nation great.

Examples are “the significant money tray, their incredible driving patience, their impeccable cleanliness, their enviable love for the state which is reflected in their zealous hard work, but for this one suffix; ‘mostly for all names’, I will hold on that suggestion and spend some more years in Japan to be very conversant with its usage and probably be drained of the Ghanaian madam prefix or the “Ama Ata Aidoo feeling” of my name being edited before I recommend such since he who fights for equity must present clean hands.

However, I hope this article has introduced you to the Japanese suffixes of courtesy if you were from a country like Ghana where prefixes as Alhaji, Auntie, Awo, Papa, Nana, or Sir rather aroused respect.

This write up is to let you maintain your calm that your name Mawusi is not being mispronounced as “Mawusi-san” but rather the Japanese are “spilling ejaculated politeness on you”.

Notwithstanding, I will like my Ghanaian family to absorb this courtesy of calling all names with ‘titles’ or a ‘tone of respect’. I am aware in Ghana we call all superiors, elders and people in authority’s names with titles, but children and out peers, I’m not sure we strictly adhere to titles for them.

That apart, if I was calling my senior in a particular field, say parenting, aside the all popular “San” suffix to show politeness and courtesy, I could specifically use the “senpai” suffix for a senior to let those around know that in that field, “Obed-senpai” could be more resourceful than “Francis-san”.

If we were to use these titles for all names, I will call my younger sibling “sister-Yaba” in Ghanaian parlance (because, Ghana’s tone of courtesy is in the prefix used before the name, so if you were my age mate or younger than I, then I will simply call your first name without any prefix) or “Yaba-san” in Japanese, (because in Japan, no name is pronounced bare regardless of age difference or relationship, all names are called with the suffix, that ‘ejaculates’ politeness).

The more intriguing lesson I found about these deliberate titles is that it keeps your tone down and controls your anger.

Can you imagine if you attempted to exchange unseasoned words with a colleague and then you said Sister Aisha or Aisha-san you are an idiot (because it will be unheard of to just say Aisha), and by the time you are done calling the polite prefix or suffix that ‘ejaculates’ politeness, your anger will have flattened to force charitable words out from your tongue to say “mepawokyɛw se woyɛ aboa” as we jokingly refer to one ethnic group in Ghana as doing, (using polite words and gestures to say impolite words, thereby downplaying the insult or impolite word altogether).

Thus the reason for my title, THE JAPANESE SAN SUFFIX; THE TITLE THAT EJACULATES POLITENESS AND COURTEOUS SPEECH. I hope the Japanese have been able to convince us in Ghana why we couldn’t shout a name from afar or sustain anger because any of them does not correspond with the expected “San” suffix of politeness said while bowing like the picture above.