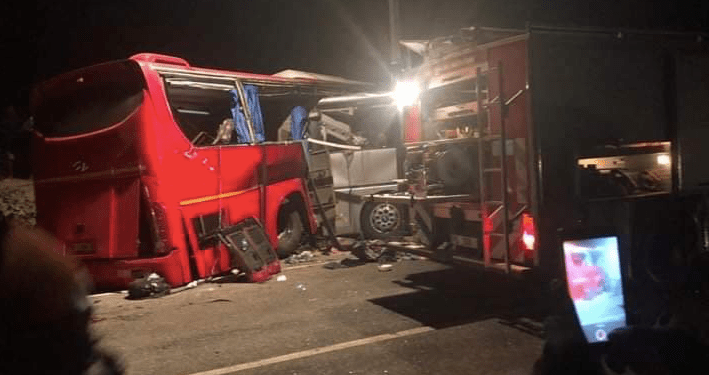 The crash occurred on Tuesday dawn.

According to the Public Relations Officer for the Ghana National Fire Service, Assistant Division Officer Abdul Wasil Hudu, the crash occurred when a vehicle moving from Accra towards Takoradi attempted to overtake a vehicle ahead in a sharp curve and collided with an oncoming vehicle en route to Accra from Takoradi.

“We had a distress call around 12.25am this morning and quickly our rescue team was dispatched to the scene and when they got there, they realized that there were two buses. When we did the rescue, those who died on the spot were about 29; made up of 15 males and 14 females. There was also one little girl, less than 1 year old,” he told Citi News.

Assistant Division Officer Abdul Wasil Hudu said the bodies of the deceased persons have been deposited at the Cape Coast Teaching Hospital.

“It wasn’t a pleasant scene because even those who were alive were in serious condition. After our rescue, we handed over the dead bodies to the Ghana Police Service and we learnt they deposited them at the Cape Coast Teaching Hospital.”

He noted that the spot is notorious for road crashes due to the sharp nature of the curve and the failure of drivers to slow down and avoid overtaking there.