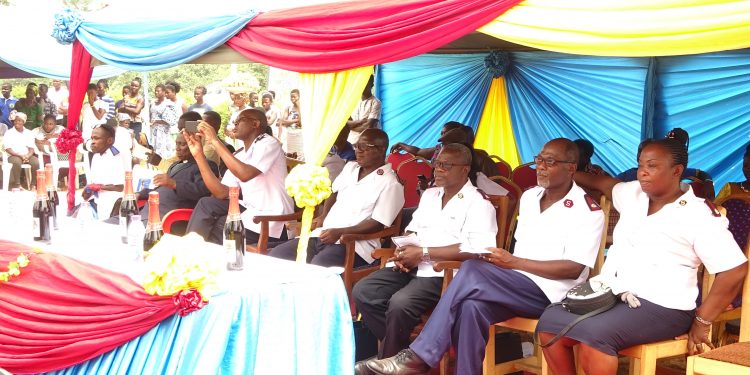 The Salvation Army Clinic at Ajumako Baa in the Ajumako Enyan Essiam District of the Central Region is appealing for government support to upgrade the facility into a modern health facility.

According to the management of the facility, the clinic started as a charity organisation rendering free services but the numbers of patients have increased making it difficult for the clinic to operate.

“The challenge here is that because we started as a charity organisation, most of our services were free of charge and we did not invest in infrastructure… we need a theatre as well as equipment so that when the pregnant women come here we can take care of them,” Samuel Darko Abaidoo, the administrator for the facility said.

Mr. Abaidoo also noted that children are forced to use adult beds because of the lack of beds for kids.

“We don’t have beds for children and children are forced to use adult beds at the children’s ward and we also have some challenges with our infrastructure like we have the midwife’s quarters which is quite dilapidated so if people can support us we will be able to generate income and also invest in the community in which we are working.”

The administrator for the clinic further called on the government to consider supporting the hospital with an ambulance since they have only one ambulance supporting a community of over 10,000.

“The next time they are distributing the ambulance I think that they should bring one of the ambulances to this place because we still use only one ambulance to transport people to the referral facility,” the administrator said.

The Salvation Army church also oversaw the graduation of 20 individuals in dressmaking whiles 20 others have also been admitted into their facility.

The purpose of the training is to equip the individuals in various trades in other not to fall victim to men who inturn to lure them with money.

” Our main intervention is to equip these girls in some trade so that they will know their right and responsibility and they will have the power to say no when it’s time and yes when it’s also time the,” administrator said.