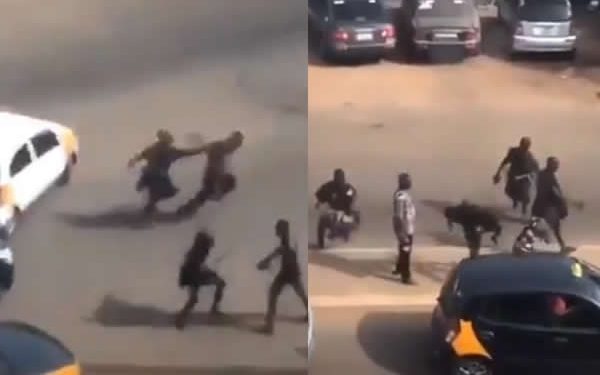 The Sunyani Traditional Council has denied ordering men to beat residents in its vicinity who were flouting customs during the funeral rites of the queen mother of the area.

The council faced some criticism after a social media video showed men, described as palace executioners, beating residents who were not in funeral colours for the mourning of Nana Yaa Nyamaa Poduo II.

A video also showed a couple of officers of the Motor Transport and Traffic Department (MTTD) also beating a resident.

A representative of the Sunyanihene, Kofi Adom Manu, admitted on Eyewitness News that “certain things went wrong but not [to the extent] of what you have been seeing.”

“The Omanhene and the Abrafour are educated people and have been taught how to maintain order and how to do things. From the onset, we experienced a lot of miscreants,” he added.

Meanwhile, the Bono Regional Police Command has stated that calm has returned to the area.

In an interview with Citi News, the Bono Regional Police Crime Officer, Chief Superintendent Nana Kwaku Dua, said a consensus has been reached with the traditional authorities to ensure their men are kept in check

“Calm has returned to the area. There is nothing to complain about. Police have mounted a very strong operation and wee have also met the traditional authority. Those who were carrying out such actions will not be allowed to do that,” he said.

In an earlier statement, the Regional Police Command also noted that it had ordered an immediate inquiry into the incident.