The Office of the Special Prosecutor has noted that there is reasonable suspicion of corruption in the Airbus scandal.

In a press release from the Office commenting on the issue for the first time since the referral from the President, the Special Prosecutor, Martin Amidu stated that offences such as bribery of public officials and the use of public office for private profit will be subjects of his investigation.

The President referred the matter to the Office after court documents from the UK and the US surfaced alleging wrongdoing by Airbus SE in a series of business deals in countries including Ghana.

Excerpts of the press release signed by Martin Amidu read:

“The Special Prosecutor has determined that the said referral and deferred prosecution of agreements and judgments accompanying them raise reasonable suspicion of the commission of corruption and corruption-related offences of bribery of public officers and the use of public office by public officers for private office which are offences falling within the mandate of this office under the office of the Special Prosecutor Act 2017 Act (959). A preliminary investigation was accordingly opened on 4th February 2020 by this Office into the allegations contained in the judgements referred to this Office aforesaid.”

The statement went on further to indicate that, the appropriate state agencies with the capacity to aid in the enquiry have already been tasked to provide full details of the saga.

It, therefore, urged members of the general public to desist from drawing conclusions on the matter along with speculation and or political lines but rather, exercise restraint for the outcome of the investigations.

“The relevant domestic public institutions which can assist the ongoing investigations have been contacted to provide information and documents under Act 595. The Office of the Special Prosecutor appeals to the general public not to speculate or politicize the disclosures made in the deferred prosectors agreements and judgements so as to allow this office to treat the suspected crimes as suspected crimes simpliciter and nothing more pending the conclusion of the investigations.” 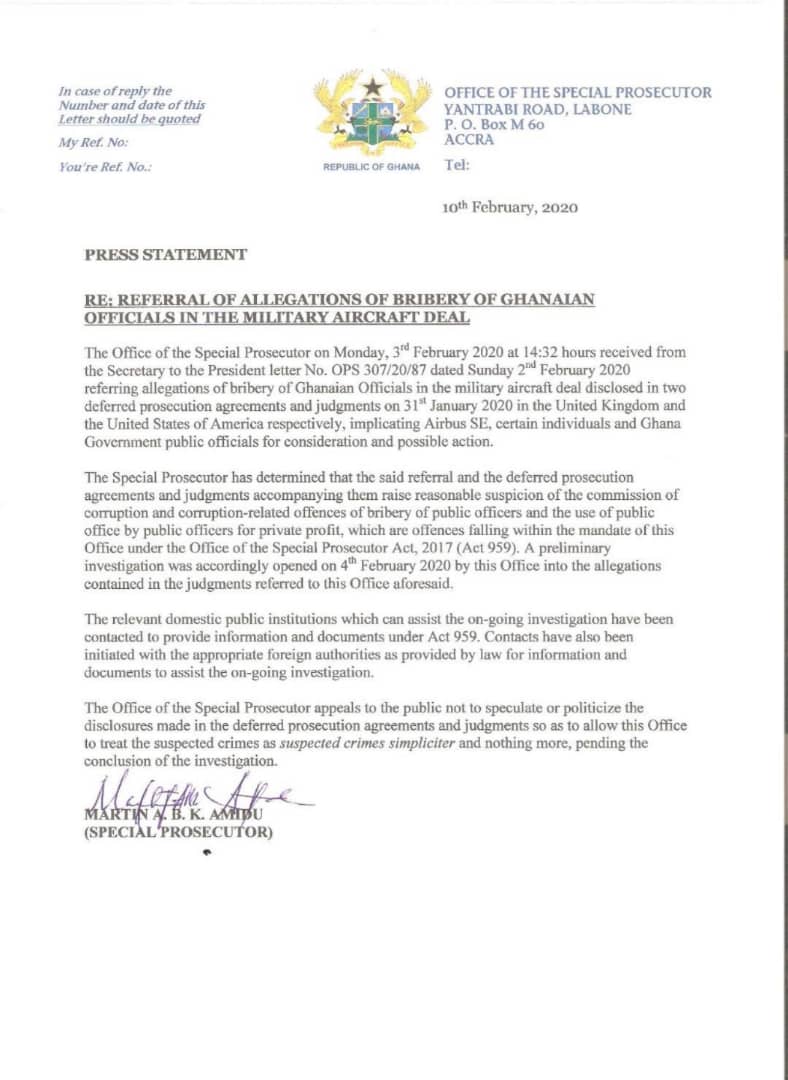 Investigations by the Special Prosecutor are expected to be conducted in collaboration with the United Kingdom authorities, according to a statement from the presidency.

A statement from the Presidency noted that Mr. Amidu will “collaborate with its UK counterparts to conduct a prompt inquiry to determine the complicity or otherwise of any Ghanaian government official, past or present, involved in the said scandal.”

The President, according to the statement, wants “necessary legal action taken against any such official, as required by Ghanaian law.”

Meanwhile, the Speaker of Parliament, Prof. Mike Oquaye has put on hold a request for the House to probe the Airbus bribery scandal.

Aircraft manufacturing giant, Airbus, has been in the news within the past few days after it agreed on a legal settlement of about £3 billion over its involvement in an alleged bribery scandal between 2009 and 2015 in various markets including Ghana.

The scandal has caused a political storm in Ghana over accusations of Airbus payments to a relative of a government official in connection with the purchase of military planes.

Meanwhile, the National Democratic Congress (NDC), which was in power at the time, has denied the claims.