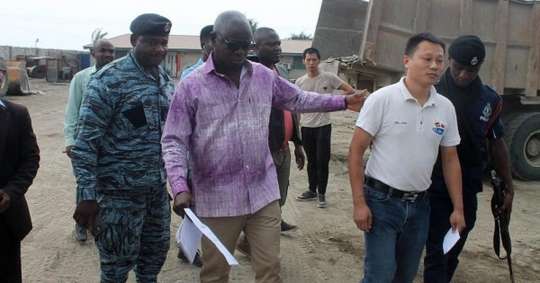 The Minister of Lands and Natural Resources, Mr Kwaku Asomah-Cheremeh has ordered the arrest of three Chinese nationals operating a quarry company without a permit at the Afienya-Dawhenya Industrial and Urban Renewal Enclave in the Greater Accra Region.

There were excavators busily working at the quarry site, with trucks loaded with chippings leaving the site.

The Minister also ordered two other Ghanaians, building structures without a permit to stop work with immediate effect.

He issued a warning to all individuals and groups putting up a residential property on state lands in Shai Hills, Afienya and Dawhenya to stop work in their own interest since no compensation would be paid by the government upon demolition.

This came to light when Mr. Asomah-Cheremeh led a team from the Lands Commission including; Mr Suleimana Dawuda Mahama, the Executive Secretary of the Commission, some police personnel, the media and technocrats of the Lands Ministry, to inspect on-going encroachment on the 13,200 acres of land acquired by the government in 2016 for an industrial enclave.

The Minister said the industrial enclave was acquired for the purposes of establishing factories as individual investors could apply to the Lands Commission to properly acquire plots of lands for setting up factories.

At Afienya, the team witnessed on-going construction of a private residential facility belonging to one John Quayson.

According to Mr Quayson, he bought the land from Mckeon Estate.

There was another Baba Seidu, who was not present at the time of our visit but met the mason he had contracted to construct structures intended to be used as real estate working on the site acquired by the government for an industrial hub.

The Lands Minister said government had issued an Executive Instrument and gazzetted the Land documents at the time of acquisition and would therefore not tolerate such impunity any longer.