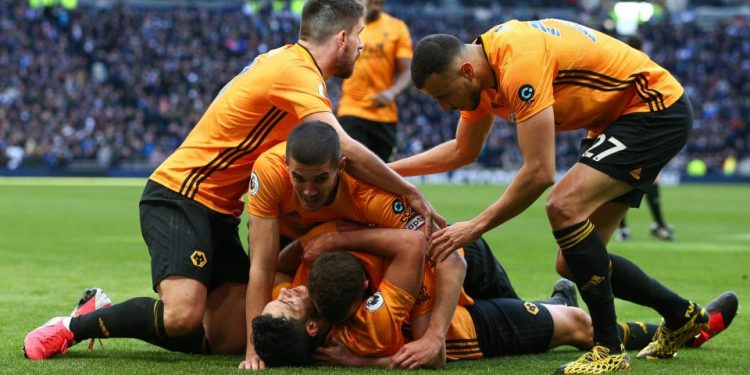 Wolves were handed a huge boost in their pursuit of Champions League football with a 3-2 win over rivals for the coveted spots, Tottenham, in an entertaining contest at the Tottenham Hotspur Stadium.

Second-half strikes from Diogo Jota and Raul Jimenez gave them the priceless three points as they were down 2-1 at half-time with goals from Steven Bergwijn and Serge Aurier. Matt Doherty scored Wolves’ first goal.

The result means Nuno Espirito Santo’s men have leapfrogged Spurs into sixth and are only out of the Champions League places on goal difference, with Manchester United only managing a draw at Everton.

The contest made a cagey start until the 13th minute when Bergwijn gave the home side the lead. Some good play down the right saw Aurier cross low for Alli, whose close-range effort was well saved by Rui Patricio but the Dutchman reacted quickest to score the rebound.

Wolves were level on 27 minutes though when Doherty took advantage of Japhet Tanganga’s inability to clear Ruben Vinagre’s powerful cross and the Irishman slammed the ball past Paulo Gazzaniga.

Both sides then exchanged half-chances with Conor Coady clearing Ben Davies’ header towards Dele Alli in the nick of time while Doherty almost got on the end of Romain Saiss’ flick-on from a corner.

But Spurs regained their lead on the stroke of half-time thanks to Serge Aurier’s beautiful effort which saw him deceive Vinagre and curl the ball into the corner of the net with his weaker left peg.

Diogo Jota and Alli both went close with headers early in the second half but Jota did get his goal to level the game up once more when he got on the end of Doherty’s low cross after some good work from Adama Traore.

The visitors then took the lead for the first time on 73 minutes with Jimenez’s well-taken strike – the Mexican collecting Jota’s pass on the right, before doing an Aurier-esc turn and slotting the ball into the top corner.

Spurs were clearly missing the likes of Harry Kane and Heung-min Son and struggled to create any chances after that as Wolves held on to claim a deserved win.