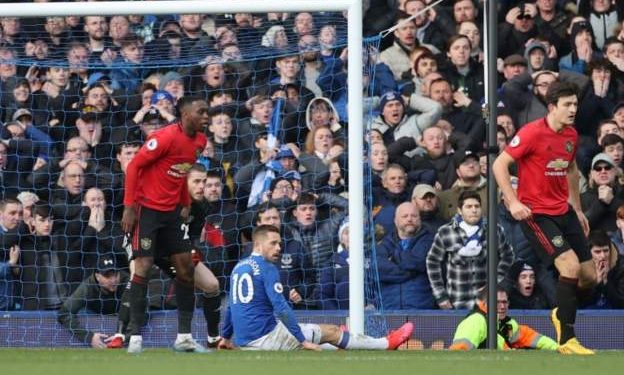 VAR came to Manchester United’s rescue to prevent Everton scoring a last-gasp winner in the 1-1 draw at Goodison Park.

Dominic Calvert-Lewin thought he snatched all three points at the death, before replays judged that Gylfi Sigurdsson was interfering with play from an offside position.

Until then, the game was a tale of two goalkeepers, as David de Gea and Jordan Pickford both made costly errors before producing stunning saves to keep things level.

De Gea gifted the hosts a goal with his first involvement on three minutes, taking too long on the ball before Dominic Calvert-Lewin blocked his attempted clearance into the net.

And then it was Pickford’s turn to slip-up when he let a speculative shot from Bruno Fernandes slip through his grasp.

But both men atoned for their errors with sensational stops in the dying minutes as the drama unfolded.

Sigurdsson didn’t actually touch the ball but he was deemed to be in De Gea’s line of vision as Calvert-Lewin’s shot defelcted into the net in stoppage time.

Toffees manager Carlo Ancelotti was so incensed with the decision that he was shown a red card for his reaction at full time.

It was selfish for politicians to grab GETFund scholarships – Dep. Health Minister