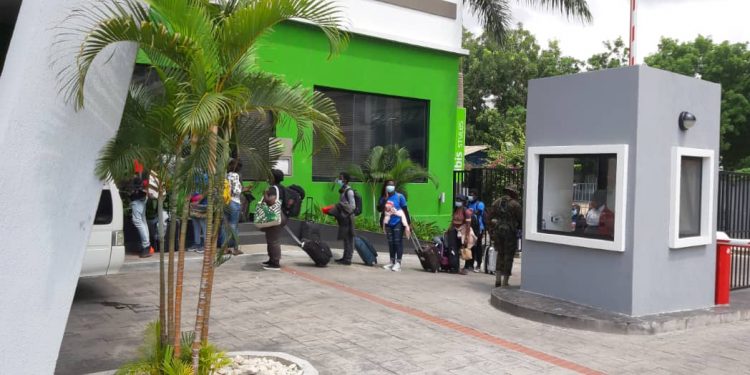 41 Ghanaians who were in Washington DC, USA, have arrived in Ghana.

Most of them were students who went on an exchange program sponsored by the State Department of the United States of America.

They arrived aboard a South African Airways flight at 9.20 am today, Saturday, at the Kotoko International Airport.

This comes a day after the government announced that it has arranged chartered flights to bring back Ghanaians home based on a schedule drawn up by the Foreign Affairs Ministry even though most countries have closed borders due to COVID-19.

The evacuees are lodging at a hotel in Accra and they are to observe the two-weeks mandatory quarantine period.

Two more contingents from Burkina Faso and Turks and Caicos are expected to arrive later in the day.

One of the students who spoke to Citi News said, “The exchange program was supposed to be for ten months. So we were supposed to come back on June 8. But we left our various states on June 3 and then we went to the USA to stay overnight and then we left.”

The arrival of these individuals comes as the first contingent from the second phase of the government’s evacuation programme for stranded Ghanaians due to COVID-19.

This plan was announced yesterday [Friday] by the Minister for Foreign Affairs and Regional Integration, Shirley Ayorkor Botchway.

Responding to questions in Parliament, the Minister indicated that a lot of considerations have gone into government’s evacuation programme.

The countries captured in the schedule include Nigeria, Mauritania, Ethiopia, China, United States Of America, United Kingdom, UAE, among others.

Madam Ayorkor Botchway also said negotiations are currently underway between Ghana’s Beijing Mission and Ethiopian Airlines for the evacuation of some 675 stranded Ghanaians in China.

The Foreign Affairs Ministry is also in discussion with the Scholarship Secretariat and the National COVID-19 Task Force to finalise arrangements to evacuate 151 Ghanaians students who completed their language proficiency courses in Benin last month using STC buses.

Member of Parliament for North Tongu, Samuel Okudzeto Ablakwa says the government should help bear the cost of quarantine for the stranded Ghanaians abroad yet to be brought back home.

According to him, these are people who have nothing in the countries they currently are, and would not be able to pay for the hotel services during the two-weeks mandatory quarantine they are to observe when they arrive.

He has also suggested that the government can seek to use school hostel facilities as quarantine centres so the cost of paying the hotels can be scrapped out.