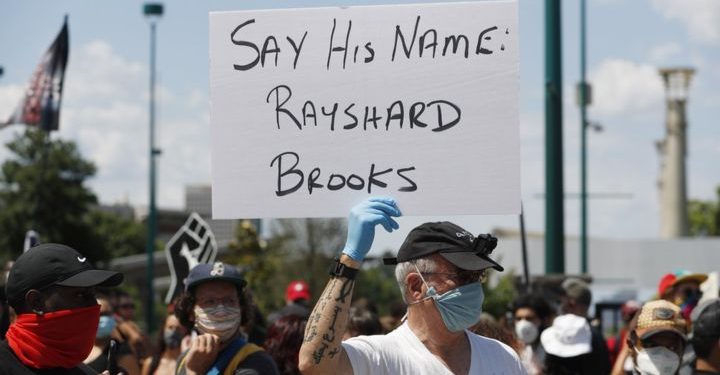 Atlanta’s police chief resigned on Saturday hours after Rayshard Brooks, a Black man, was fatally shot by an officer in a struggle outside a fast-food restaurant.

Authorities said the slain man had grabbed an officer’s taser but was running away when he was shot.

The shooting of Raysgard Brooks has triggered fresh fiery protests against police brutality.

Garrett Rolfe and Devin Bronsan, the two officers involved in the fatal shooting of Rayshard Brooks, were fired and placed on administrative duty respectively.

One of the four former Minneapolis police officers who was charged over the death of George Floyd was released on $750,000 bail.

Floyd, a Black man, died on May 25 after a policeman knelt on his neck for nearly nine minutes. His death has sparked nationwide calls for policing reforms and global protests.

Meanwhile, thousands of New Zealanders turned out to Black Lives Matter protests in Auckland and Wellington on Sunday.

In Auckland, the protest began at the central Aotea Square and ended at the US consulate, where protesters took a knee and observed a minute’s silence to commemorate George Floyd, who died at the hands of Minneapolis police last month.

In Wellington, the capital, protesters marched from Civic Square to the grounds of Parliament, chanting “Black Lives Matter” and holding placards with slogans like “Racism is a pandemic, let’s fight it!”

Curbing flooding in Accra must be a national priority – Engineer Mahama