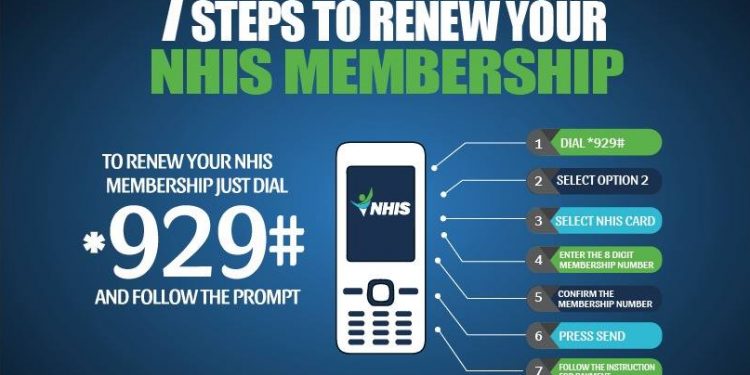 Available data demonstrate that the cumulative number of mobile renewals from January 2019 to May 2020 stood at 8,099,074.

Except the Upper West Region, all regions recorded increases in mobile renewal enrolment between the months of April and May 2020, according to the National Health Health Insurance Authority (NHIA).

“To this end, Executive Management commends the Scheme’s active members and encourages them to continue making good use of the Mobile Renewal Service whilst urging non-active members to get back onto the Scheme in line with Ghana’s objective to attain Universal Health Coverage (UHC),” a statement from the NHIA noted.

While COVID-19 continues to spread, it is expected that all National Health Insurance Scheme (NHIS) members will take action to prevent further transmission, reduce the pandemic’s impact by frequently using the mobile renewal service which serves as a social distancing mechanism.

In 2019, a total of 9.1 million renewed their membership out of which more than 5.8 million members representing 70 per cent used the Mobile Renewal platform.

The overall standings indicated that 79.3% of the renewals constituted members who had renewed their membership with the Ashanti region recording the highest number, followed by the Greater Accra and Brong Ahafo regions.

Ending 2019, the informal sector, which constitutes the only fee-paying NHIS membership category represented 34.1% of the active members, an increase from 31.5% in the previous year.

“By simply dialing *929# on their mobile phones and paying from their mobile money wallets to stay active, the Mobile Renewal Service offers ease and convenience to members and also gives members the opportunity to provide feedback on their attendance to the NHIA credentialed service providers.”

According to NHIA, NHIS members who are considered as the extremely poor (Indigents), classified by the Minister for Gender, Children and Social Protection represented 5.6%, an increase from 3.7% in the previous year.

“New members constituted 20.7% of the active membership with the Greater Accra Region recording the highest number followed by the Ashanti and Northern regions.”

The Brong Ahafo Region scored third with active membership of 1.5 million and the Eastern was placed fourth with 1.3 million respectively.

The Upper West Region had the lowest active membership of 0.47 million.

From January to December 2019, female members continued to dominate active membership of the National Health Insurance Scheme (NHIS) with a national outlook of 58.6% against 41.4% males.

The Scheme has become more attractive as members who left the Scheme are returning thereby increasing the number of persons being covered in line with Universal Health Coverage (UHC) vision of the government.

This development buttressed the NHIA Chief Executive, Dr. Lydia Dsane-Selby’s saying that the Authority’s major concern is to increase its membership to reposition Ghana in line with the attainment of Universal Health Coverage (UHC).