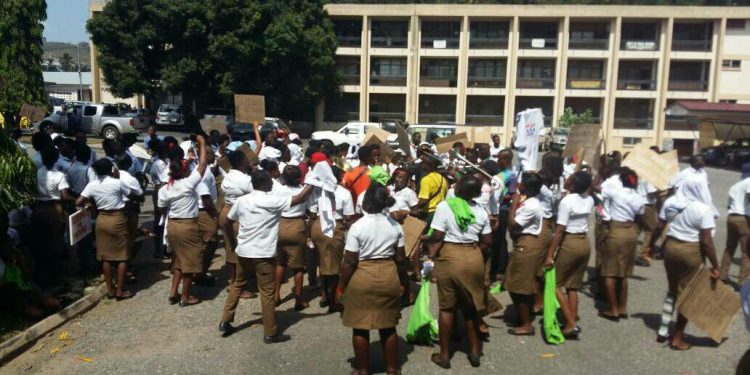 Hundreds of students of the Schools of Hygiene on Monday morning picketed at the premises of the Ministry of Sanitation and Water Resources in Accra.

The students, who brought along mattresses, food items and cooking utensils, set up camp at the ministry as early as 3:00 am, vowing not to vacate the premises until they receive clearance for their unpaid allowances despite police presence.

These trainee students were promised an allowance of GHc 400 each for the three years they were in school but the government has so far failed to pay any of the 1,348 students.

“We are here for our allowance and we are not leaving until we get our money. We are going to sleep there even if it takes a month, we will be here”, one other student lamented.

As it stands now, each student is owed an accumulated amount of 12,000 according to the group, contrary to the Ministry’s claim of owing the students an amount of GHS 9,096,000.

The leaders of the students complain that authorities were not forthcoming.

“They want to form a committee and they want us to be part of the committee to speed up the process to pay the money. But we have been hearing this story for years”, the leaders complained.