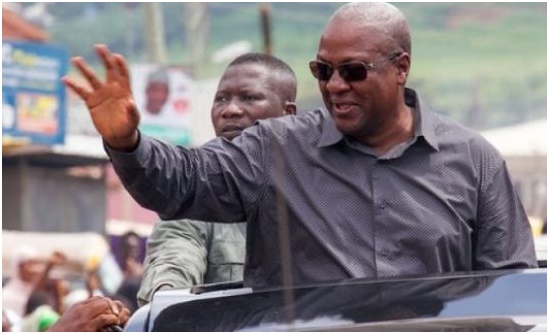 Former President, John Dramani Mahama, has urged Ghanaians to give him a second shot at the Presidency to enable him right the wrongs of his previous administration.

The National Democratic Congress (NDC) flagbearer admits though he worked hard to improve the livelihood of the citizenry, there were steps he wrongly took during his first term in office.

Speaking with the Chiefs and people of Ullo in the Upper West Region, John Dramani Mahama promised that a new NDC administration will be much better than the previous one when given the nod.

“Development takes place in stages. The last time we were in government, it was to improve the road network so we get many of the roads on contract. Unfortunately, because the NDC left office, a lot of these projects came to a standstill. So I can assure Nana that, I am in a unique position because I am the only President who has the opportunity to come back and correct his mistakes. No other President in Ghana can do that. I believe that a new NDC government will be a much better government than the previous one. ”

Already, John Mahama has described the upcoming elections as a critical event that would help mould the nation’s destiny adding that it would shape the future of the young generations and that is the reason he was seeking power back.

He has also accused the New Patriotic Party (NPP) of “political short-sightedness and victimisation,” and said, “this government takes decisions aimed at penalising political opponents but end up affecting the growth and prosperity of the Ghanaian”.

Support Mahama’s ‘rescue mission’ back to presidency – Suhuyini to Ghanaians

The Tamale North Member of Parliament, Alhassan Suhuyini has also been pushing for the return of the former President.

He says there are enough reasons why Ghanaians must reject the governing NPP on December 7, 2020.

According to him, the only ways Ghanaians will see some comfort is to vote the National Democratic Congress (NDC) and its leader John Dramani Mahama to continue the “rescue mission” of the party.

“So we need to ensure that President Mahama gets back to the flagstaff house,” he insisted.

The legislator has also said the return of John Mahama will see a massive economic transformation.

“In his second coming, the investments will be targeted at the private sector, the public sector and the informal sector. The next phase of his presidency will ensure that investment goes into creating jobs. Dr. Bawumia and the NPP do not portend well for the future of the NPP. That is why there is the need for us to rise above partisanship as Mr. Mahama has always demonstrated to support the rescue mission that will take him back to the Flagstaff House to continue the God things he was doing, correct what he may have done wrong so that together, we can put this country back on the path of growth, inclusiveness and development.”