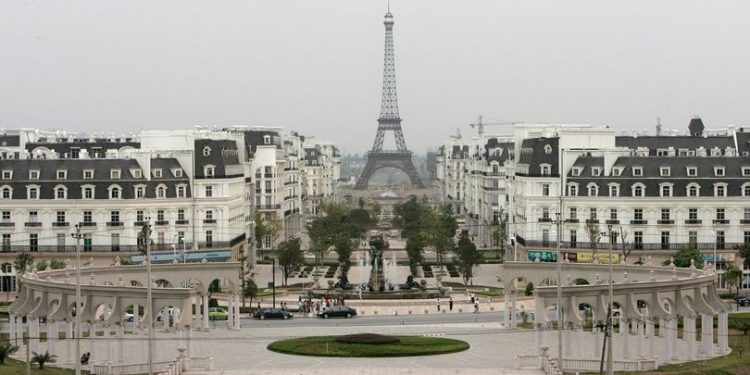 Visitors can wander down the Champs Elysées, take a selfie in front of the Eiffel Tower and admire the Arc de Triomphe’s architecture… in China.

That’s because the town of Tianducheng was built to look just like a replica of the French capital, complete with some of the iconic landmarks.

For example, there’s a roundabout that includes a copy of the Arc de Triomphe (although traffic is significantly quieter than the original spot).

Meanwhile, you can wander through the landscaped gardens that are a nod to the iconic Luxembourg Garden – complete with a fountain that’s a copy of the real one back in France.

For those who have the Champs Elysées on their bucket list, there’s a copy of the main square, although you won’t find the shops and boutiques that are found in Paris.

Meanwhile, apartment blocks have been built to replicate Parisian-style architecture, including some of the cobbled streets and landscaped gardens that the city is renowned for.

The resemblance is pretty impressive, despite the town being located approximately 6,000 miles east of the City of Lights.

The town in the Yuhang District near Hangzhou, China, has been around since 2007 and was initially built to house around 10,000 residents.

As it’s on the outskirts of Hangzhou, there are plenty of transport links from the city to this fake Paris.

Unsurprisingly, it does attract some visitors who come for the quirky photo opps, as well as locals who visit to get a taste of the French city without having to splash the cash on flights to go and see the real thing.

Of course travelling to China (or France) isn’t possible for Brits at the moment due to global travel restrictions during the pandemic.

However, if you are after a quirky day out, there are heaps of British alternatives to iconic landmarks worth bookmarking.

We’re talking hotspots that are similar to the likes of the Taj Mahal and the Great Wall of China – it’s not quite the same, but it could be just the thing to tide you over until travel re-opens properly again!