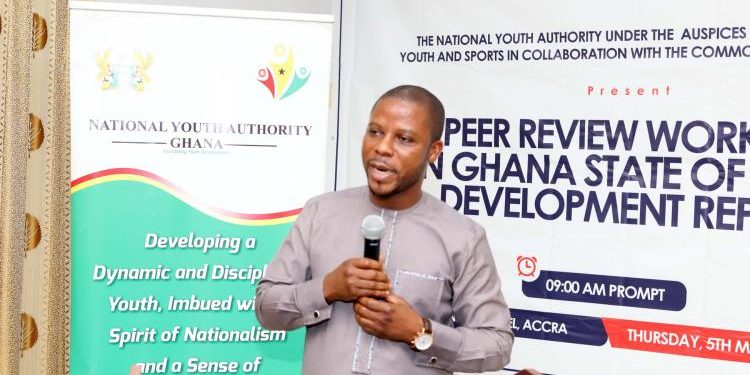 The National Youth Authority (NYA) wants the youth of Ghana to be mindful of their actions during the election period.

Lamenting the pockets of violence that characterized the voters’ registration exercise, Chief Executive Officer (CEO) of the Authority, Sylvester Tetteh urged the youth to desist from such parochial activities and urged them to rather ensure peace prevails in the country before, during and after the December 7, 2020 polls.

He also condemned recent incidents of violence in the Volta Region allegedly perpetrated by youth members of a secessionist group.

Mr.  Tetteh was speaking at the media launch of the Africa Youth Day, which is to be celebrated on November 1, under the theme “A Peaceful Ghana: The Rhetorics, Realties and the Youth Factor”.

“We want to use this opportunity to remind the youth that the future of Ghana belongs to them and it is in their supreme interest to promote peace before, during and after the elections. Undeniably, you are the main tools that are used to perpetrate acts of violence. As part of the Authority’s efforts to ensure peace, unity and stability, we encourage them not to relent in their duties and responsibilities but rather channel their energies to consolidate their positive strides to lead them on a journey to productive service while assuming their position as custodians of Ghana’s rich cultural heritage”, he said.

The National Chief Imam, Sheikh Osmanu Nuhu Sharubutu has earlier cautioned Muslim youth not to be used as agents of violence during the upcoming general elections.

According to him, Muslim youth are largely exploited by political parties as tools of violence during the election period.

“Lack of knowledge is retrogression and deficiency. If you are enlightened, it will be very difficult to be used as a tool for violence. Majority of the Muslim youths…have become victims of manipulation. We are expected to pursue knowledge and be empowered enough to withstand political manipulations.”