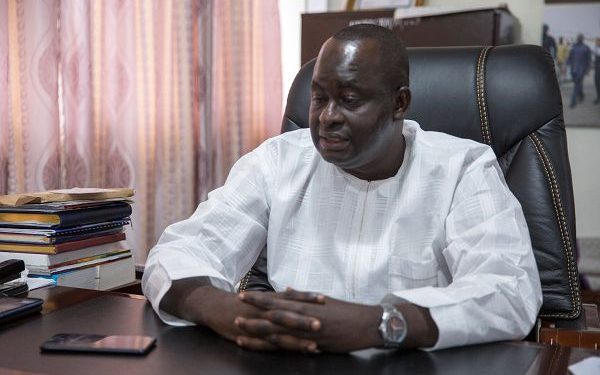 I bring to you warm greetings Dr. Hafiz Bin Salih! Please permit me to share what I call my nightmare and that of both residents and visitors of a district under your care and also fortunately and directly controlled by your very good self lately.

The Sissala West District is incontrovertibly one of the districts in the region that is gravely underdeveloped and thus left in a sorry state despite their records of being part of the two districts that produces the best quality maize in Ghana.

The just last year 2019, a maize farmer from the Sissala West District has adjudged the National best quality maize farmer.

One may be compelled to ask. What does this achievement bring to the District? As nothing substantial come with these fine records and hence demoralizes hard work especially to the whole District at large.

One of the critical sectors in the Sissala West District that craves for government’s attention is the health sector. This sector in this District has received little attention from subsequent governments to date. The District hospital which serves as a referral centre to the whole District can be compared to some CHIPS compounds in other parts of the country and one could imagine the state of it.

Several pleas from stakeholders for an expansion of the District hospital yielded no results except somewhere in 2018 when a small detached facility (building) intended to host labour ward and children’s ward was constructed to completion.

The completion of the facility ironically ignited nightmare among the users of the hospital as years pass by without the facility been commissioned for usage. Not even when UNICEF donation of medical equipment could trigger the commissioning of the facility for usage but kept locked and being admired by both hospital staff and patients who throng the hospital and hospitalized in crowded two halls each containing less than 11 beds.

Information gathered from deep throat sources from the Sissala West District assembly indicates that there is no tangible reason for the delay in the commissioning of the facility for on-ward usage.

A supply of items for the new facility was equally sanctioned by the District Assembly in the year 2019 augmented with donations from UNICEF.

As these actions and inactions of authorities unfold, two halls which could be likened to the living hall of a DCE are used to host female patients and children in one and the other hall hosting the labour ward.

Pictorial evidence shows no escape should a contagious disease strike as spaces between beds less than 11 are not up to 3 meters. There is no sign of adhering to COVID-19 protocols in these wards as the situation would not allow adherence.

So, if a health facility can be this crowded while a new facility sits in there with equipment donated by UNICEF way back in 2019 and it not been used,  how do you expect the health personnel to teach patients about spacing in their homes with regard to COVID-19?

The situation giving the medical superintended at the hospital sleepless night has made frantic efforts for the facility to be commissioned but all fell on death ears.

Now, I am directing this letter to your outfit because you are the supervisor of all MCEs and DCEs in the region and currently the DCE for Sissala West District following the relief of the substantive DCE of the Sissala West by the president less than a month ago. I don’t want to know what led to his sacking but only want to see the new facility being used in the hospital.

I can’t imagine how about GHS326,000.00 worth facility could be locked up while the hospital personnel endure sleepless nights on how to get little spaces to accommodate sick persons.

What baffles many including myself is that this facility was executed under this current government and hence we shouldn’t be witnessing feet dragging attitude to commissioning the facility as the past government cannot claim ownership of the project. I say this because that has to be the anti-development path we chose as a country.

I am also adding to you that, failure to commission this facility for usage would gravely affect the fortunes of your government or party winning the heart of the people in the Sissala West District.

Besides, I am sorry to create your indulgence that, failure to see this facility being put to use will compel me to officially write to UNICEF headquarters telling them how their donated items are been locked up while vulnerable people are denied from using them.

My summary of the situation is “wizardry to the highest form by authorities in government to the people of the Sissala West District’’.

Mr. Regional Minister, I admire your swift response to pleas since taking over as the Regional Minister and therefore very optimistic my letter would be given needed attention in the coming days not weeks.

I chose to be moderate in my letter because I know how responsible you are and results are all that matters to me and my voiceless people.