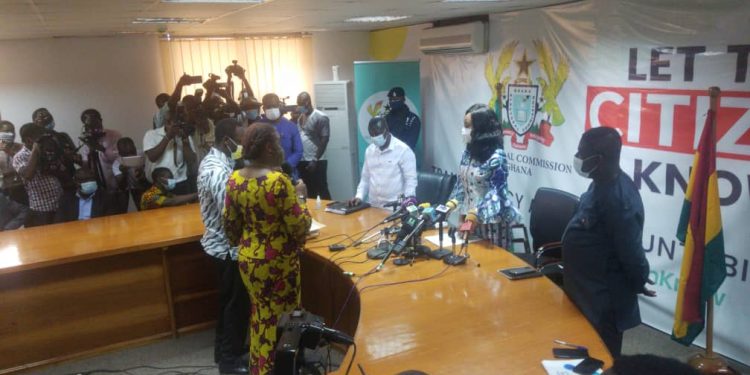 The presidential candidate of the Progressive People’s Party (PPP) Brigitte Dzogbenuku has submitted her nomination forms for the 2020 presidential polls.

Madam Dzogbenuku after submitting her forms on Wednesday, October 7, 2020, asked the Electoral Commission (EC) to consider giving her a discount on the GHS100,000 filing fee.

She said the reduction of the filing fee will encourage her and other women who are desirous of participating in the electoral process but financially challenged, to come forward.

Madam Dzogbenuku is, however, hoping to be cleared to lead the PPP into the polls.

“I am requesting for a discount on the nomination fees because I am a woman. As it stands, we have filed [the nomination form] but if you [EC Chair] finds in your heart to give us a discount, we will be happy for us. It will be a form of encouragement to other women to step up and not be deterred by money to the leadership position that women deserve in this country.”

On her part, the Chairperson of the EC, Jean Mensa assured that Dzogbenuku’s plea will be considered.

“I think the appeal will go immediately on the forms, and we will present you with our decision shortly. Your proposal is something the Commission would consider because it is one of the things we discussed thoroughly, but we could not arrive at a conclusion. But it will still be discussed,” she said.

Others who submitted their forms on Tuesday include Rev. Christian Kwabena Andrews, popularly called Osofo Kyiri Abosom on the ticket of the Ghana Union Movement (GUM) as well as two-time independent presidential candidate, Jacob Osei Yeboah.