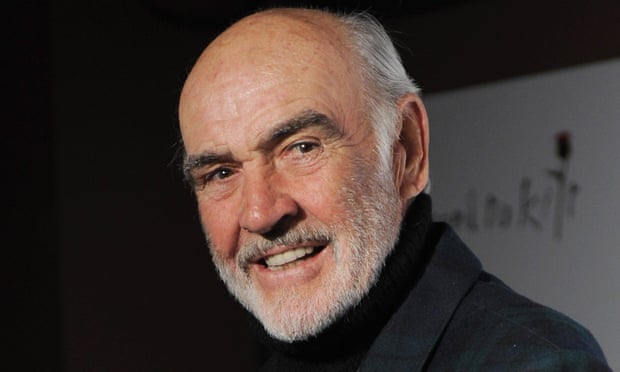 Sean Connery, the Scottish actor best known for his portrayal of James Bond, has died aged 90.

His son, Jason, said he had died peacefully in his sleep, having been “unwell for some time”.

He was admired by generations of film fans as the original and best 007 and went on to create a distinguished body of work in films such as The Man Who Would Be King, The Name of the Rose, and The Untouchables.

Jason Connery, also an actor, said his father died overnight while in the Bahamas with many of his family beside him.

“We are all working at understanding this huge event as it only happened so recently, even though my dad has been unwell for some time,” he told the BBC. “A sad day for all who knew and loved my dad and a sad loss for all people around the world who enjoyed the wonderful gift he had as an actor.”

Born Thomas Sean Connery in 1930, he grew up in the tough Fountainbridge area of Edinburgh and left school at 14 to work as a milkman for the Co-op. In 1948, he joined the Royal Navy but was later discharged on medical grounds. He began bodybuilding aged 18, and got work as a life model, among many jobs, and entered the Mr. Universe contest in 1953, though he did not win.

Having been interested in acting for some time, Connery used his Mr Universe visit to London to audition for a stage version of the South Pacific and landed a role in the chorus.

His acting career then took off: first in rep theatre and then small roles in TV shows, such as Dixon of Dock Green and The Jack Benny Program. His first credited film role arrived in 1957, playing a hoodlum in the 1957 British thriller No Road Back.

However, it was a BBC version of Rod Serling’s Requiem for a Heavyweight that provided his breakthrough lead role, playing a boxer facing the end of his career in the ring. His film profile increased as a result, with support roles in Hell Drivers, a lorry-driving thriller starring Stanley Baker, and Action of the Tiger, directed by Terence Young, with whom Connery would later reunite on Dr No.

Connery landed a substantial role in the war-set melodrama Another Time, Another Place in 1957 opposite Lana Turner, then a huge Hollywood star; in a widely retold anecdote, he reportedly came to blows with Turner’s lover, the notorious gangster Johnny Stompanato, after the latter suspected the actors were having an affair.

But it was his casting, at the age of 30, in the first film adapted from Ian Fleming’s series of James Bond novels that cemented his screen status. Reportedly at the insistence of producer Albert “Cubby” Broccoli’s wife, Dana, Connery got the role in Dr No over better-known actors due to his “sex appeal”.

Despite initial misgivings, Dr No was a huge success, not least because it had been produced, cautiously, on a comparatively low budget. Released in 1962, it was a hit in Britain but also did well commercially in the US.

Connery went on to appear in four more Bond films in succession, between 1963 and 1967: From Russia With Love, Goldfinger, Thunderball and You Only Live Twice.

His dramatically increased star status also allowed him to make films outside the series, notably the psychological thriller Marnie, for Alfred Hitchcock, and The Hill, a military-prison drama directed by Sidney Lumet.

However, his increasing disenchantment at playing 007 saw him drop out of the next Bond film, On Her Majesty’s Secret Service, and he was replaced by George Lazenby. However, the Australian actor’s tenure lasted only for a single film, and Connery was lured back for Diamonds Are Forever in 1971 with an enormous fee.

Connery refused to return again – though he did participate in Never Say Never Again, the “unofficial” Bond film released in 1983 that resulted from a legal battle undertaken by the Thunderball co-writer Kevin McClory, again with a huge fee. Connery was now secure in a high-price, high-status existence, allowing him to work on a number of widely differing projects.

He took the lead in John Boorman’s bizarre sci-fi fantasy Zardoz, acted alongside Michael Caine (a longtime friend) in the Kipling adventure yarn The Man Who Would Be King, played a middle-aged Robin Hood in Robin and Marian, and a crime-solving monk in the Umberto Eco adaptation The Name of the Rose.

In the ensuing decades, he retreated largely to colourful supporting roles. He won his only Oscar in 1988 for his turn as the principled Irish beat cop Malone in The Untouchables; he played Indiana Jones’s feisty father in Indiana Jones and the Last Crusade, and a renegade Russian submarine captain in The Hunt for Red October.

After a difficult experience making The League of Extraordinary Gentlemen, during which he reportedly clashed repeatedly with the director Stephen Norrington, Connery “retired” from acting in 2003, and refused an offer to join the cast of the fourth Indiana Jones film in 2007, saying “retirement is just too damned much fun”. However, he did complete one more film, voicing the title role in the Scottish-made animation Sir Billi.

Throughout his career, Connery made no secret of his support for Scottish independence, and became a high-profile member of the Scottish National party, taking part in party political broadcasts in the 1990s and appearing alongside then-leader Alex Salmond.

His politics reportedly led to the Scottish secretary Donald Dewar blocking plans for Connery’s knighthood in 1997, but the honour finally came three years later. However, as Connery had moved away from the UK in the mid-1970s, his substantial financial contributions to the SNP were ended after legislation disallowed funding from overseas residents.

Connery was married twice: first to the Australian-born actor Diane Cilento between 1962 and 1973, and then to the French-Moroccan painter Micheline Roquebrune in 1975. He is survived by Roquebrune and Jason, his son with his first wife.

Scotland’s first minister, Nicola Sturgeon, said the country was mourning one of its best-loved sons and that her thoughts and condolences were with Connery’s family.

“Sean was born into a working-class Edinburgh family and through talent and sheer hard work became an international film icon and one of the world’s most accomplished actors,” she tweeted.

“It was a privilege to have known Sean. When I last spoke to him it was clear even then that his health was failing – but the voice, the spirit and the passion that we all loved so well were still there. I will miss him. Scotland will miss him. The world will miss him.”

The actor Hugh Jackman said he “grew up idolising” Connery, both on and off the screen, while fellow Scottish actor Robert Carlyle said he was “a trailblazer, a true legend and a gentleman”.

Sam Neill, who appeared with Connery in The Hunt for Red October, tweeted: “Every day on set with Sean Connery was an object lesson in how to act on screen. But all that charisma and power – that was utterly unique to Sean.”

The family and office of the late Roger Moore, one of Connery’s successors as Bond, tweeted: “How infinitely sad to hear the news Sir Sean Connery has passed away. He and Roger were friends for many decades and Roger always maintained Sean was the best ever James Bond. RIP.”