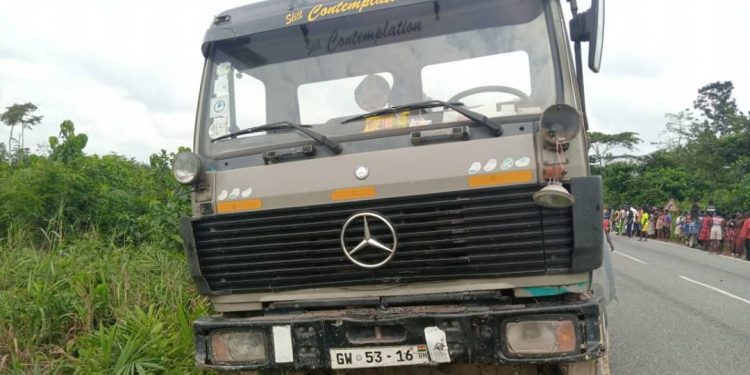 An Agric Extension Officer from Daboase in the Western Region, Kwasi Kyereh Amanfo met his untimely death in a fatal crash last Friday when he was on his way to pick an award at the just-ended farmers’ day celebration.

Late Ampofo was expected to pick the Best Extension Officer’s award at Wassa Essiaman in the Wassa East district but died instantly when the motorcycle he was riding on crashed into a tipper truck.

The Commander of the Western Regional Police MTTD, Chief Superintendent Richard Appiah confirmed the incident in a report sighted by Citi News.

“On 6th November 2020 at 11:20 am, David Amo, aged 43 years from Daboase, called at Daboase Police station. He reported that on the same day at about 10:43 am, while driving his Benz Tipper Truck with registration No. GW 53-16 with his mate on board and coming from Sekyere Krobo to Daboase and on reaching a section of the road near Aboaboso, he was involved in an accident with a motorbike rider by the name Kwasi Kyereh Amanfo. The motor rider died instantly and therefore he is informing the police for the necessary action to be taken.”

“Suspect driver, David Amo, led police to the scene of the accident between Aboaboso and Nsuta Junction where the body of the deceased Kwasi Kyereh Amanfo was seen lying on the near side of the road in a supine position with the mangled Yamaha motorbike with registration No. M-18-GT 1876 besides him. The body was conveyed to Gye Nyame, a private mortuary at Dominase for preservation and autopsy. The suspect driver is currently in police custody assisting with investigation. The tipper truck has been impounded and the mangled motorbike conveyed to the station pending investigation,” the notice from the police added.

The farmers’ day award ceremony was held on Friday, November 6, 2020, at the various districts and municipalities nationwide while the national one was commemorated at Techiman in the Bono East Region.