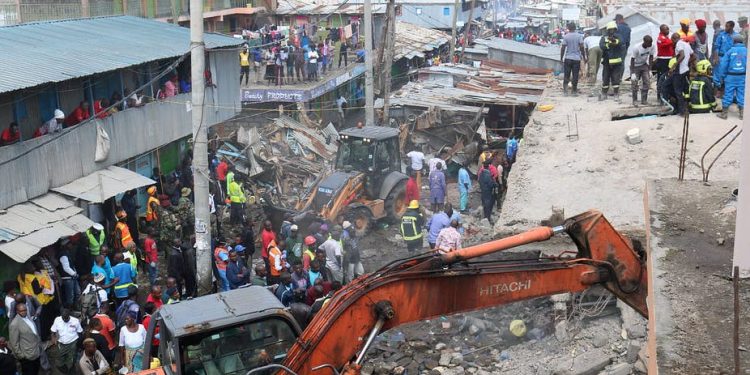 Collapsed buildings are worryingly common in several large African cities. One study counted 54 building collapse deaths and 122 injuries in Kampala, Uganda between 2004 and 2008. Another identified 112 cases in Lagos, Nigeria from December 1978 to April 2008. Cities in Ghana and Kenya, too, have recorded similar fatal incidents.

This isn’t a uniquely African problem, though. It occurs in Asia’s rapidly urbanising areas, too. Buildings collapse either during construction or when they’re already occupied.

This argument has some merits – but it doesn’t adequately explain the problem. Why, in societies that attach a high social status and cultural prestige to home ownership, would builders constantly disregard safety considerations?

So, I set out to learn more. I focused on Ghana. The results go beyond the issues of materials, skills and regulatory enforcement. They reveal more about the institutional history that shaped the practices that create dangerous buildings.

My research provides a better understanding of the range of agencies, motivations and constraints that incentivise poor building construction. Hopefully it can contribute to helping build safe, resilient cities on the continent.

I interviewed architects, contractors, surveyors, structural and civil engineers and other construction experts with knowledge in Ghana. I also interviewed authorities from Accra and Kumasi, the country’s capital and second largest cities. Media reports and research show that most of Ghana’s building collapses happen in these cities.

My interviewees captured most of the known issues: builders use substandard materials, ignore safety requirements and offer construction jobs to unskilled people.

But it’s clear that other, external factors are also at play.

When Ghana’s economy tumbled in April 1983, the then military government approached the International Monetary Fund (IMF) and the World Bank for help. The help came, under the condition of “structural adjustment” of the economy. Most developing countries that applied for support from the World Bank and IMF were made to sign onto similar programmes.

Structural Adjustment Reform involved a series of economic interventions. But – in Ghana and elsewhere – the underlying idea was to remove governments from the provision of public goods and, instead, install private actors.

For Ghana’s housing sector, this meant the removal of tariffs on imported building materials, the withdrawal of state grants to housing agencies, and the introduction of tax holidays for private real estate companies. These and other similar interventions were designed to attract private companies into the housing sector. The assumption was that private companies would provide more and cheaper houses and, therefore, serve the housing needs of the poor better than the state could.

Sadly, they instead added to existing problems and contributed to new ones.

At that time, Ghana’s post-colonial authorities hadn’t dismantled the planning systems and regulations the British had left behind. In fact they still adhere to these today. It’s a problem because the regulations encourage the use of expensive imported building materials. It is estimated that about 80% of Ghana’s building materials are imported.

Land prices have increased too, For instance, in the 1980s and 1990s, the price for building plots in prime cities in Ghana increased by more than 1000%. This, as private, often foreign, real estate companies moved in as a result of the structural adjustment deal.

The increasing prices of building materials and urban lands have made housing more and more costly. And private real estate companies get big tax holidays to provide “affordable housing”. But they aren’t delivering.

Their dollar-priced houses are affordable only to high income earners; staff of foreign embassies and transnational corporations and wealthy Ghanaians residing in the country and abroad. The majority of the population has been excluded from the market. Structural adjustment didn’t cause this: it hardened the housing scarcity and inequality created by Ghana’s colonial and early post-colonial governments.

The failure of formal housing policies to accommodate the majority has sent most Ghanaians to the informal sector.

This sector lacks finance schemes, so low-income informal home builders are forced to cut corners. They also build as and when they can afford to. Buildings may take years to complete – long enough to develop structural problems even before work is completed, partly because materials and incomplete sections are exposed to the weather.

Not only are buildings poorly constructed, but some are done with great haste. Additions are made to old structures and some are converted to uses not intended in the original designs.

One architect I interviewed said:

The reason (collapses happen) in the urban areas is that there is high demand (for buildings) and there is pressure. So, the wrong thing is done hurriedly – at lightning speed.

Problems such as corruption and political interference further undermine the authorities’ already under-resourced capacity to bring things under control. The result is an atmosphere where inappropriate construction practices thrive in ways that undermine public safety.

Way out of the problem

It is often suggested that all would be solved if the authorities just enforced building regulations. But it seems that won’t go far enough.

Ghana’s building safety challenge is largely about the inefficient allocation of public resources (through housing policy and the organisation of the economy generally) for the private gain of a privileged few. The low-income majority are left to fend for themselves.

Unless policy is changed to meet the needs of the majority, the creation of unstable buildings in African cities cannot be prevented.