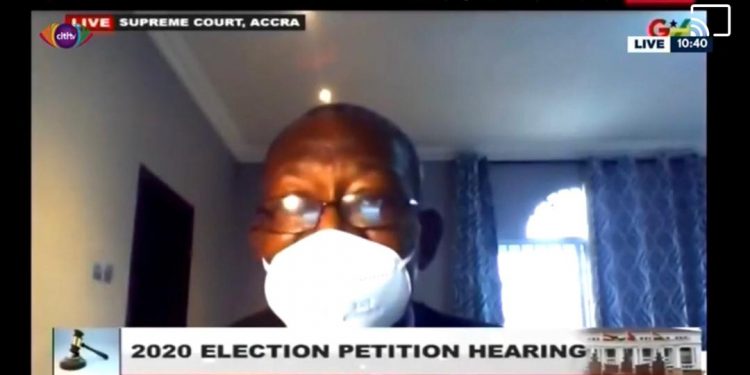 At the election petition hearing on Friday, February 5, 2021, the Supreme Court ordered for the removal of five paragraphs from the witness statement of Rojo Mettle-Nunoo, one of the agents who represented John Mahama at the Electoral Commission’s National Collation Centre during the 2020 polls.

Mr. Ampaw had argued that 23 paragraphs in Mettle-Nunoo’s 32-paragraph statement should be expunged because they were not based on the pleadings of the petitioner and also seeking to introduce a new case.

The lead counsel for the 1st respondent, Mr. Justin Amenuvor also associated himself with the objections raised by Mr. Ampaw.

However, the lead counsel for the petitioner, Mr. Tsatsu Tsikata opposed the objections raised.

He argued that Mr. Ampaw’s objections were baseless “and should be overruled” by the court.

The Supreme Court in a unanimous decision struck out paragraphs instead. They include paragraph 4, 5, 6, 7 and 18.

Below are excerpts of the court’s ruling read by Chief Justice Kwasi Anin-Yeboah:

The 2nd respondent’s counsel has raised objections to various paragraphs from the testimony of Robert Joseph Mettle-Nunoo [PW3] in these proceedings.

They objected on the grounds that they are not supported by the pleadings. Paragraph 9,15, and 18 were objected on the basis that they raised issues of authenticity of documents in the election that the court has already dealt with.

Paragraph 10 was objected on the grounds that the petitioner was seeking to build a new case.

Paragraph 12, 25 and 26 were objected to as reflecting the opinion and not irrelevant to issues in controversy.

The petitioner’s counsel argued that the objections are supported in law because the testimony is premised on either the petition and the answers and the prior testimony of the second witness [Dr. Kpessa-Whyte] on the 3rd February 3, 2021, and the answer of the 1st respondent herein.

We’ve considered the submissions of both counsels and the testimony and the pleadings in this petition.

We are of the opinion that paragraphs 4, 5, 6, 7 and 18 ought to be struck out as they have no foundation in the pleadings or supported by the evidence and the same is hereby struck out and the remaining paragraphs in the witness statement are maintained.