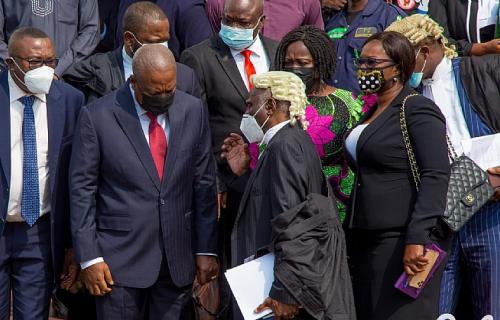 John Dramani Mahama has filed, at the Supreme Court, the witness statement of Robert Joseph Mettle-Nunoo, one of the persons who served as an agent for the National Democratic Congress (NDC) at the Electoral Commission’s National Collation Centre during the 2020 polls.

Mr. Mettle-Nunoo has become critical in the petition after the second witness, Dr. Michael Kpessa-Whyte, during his cross-examination, said the former minister was instructed by the Chairperson of the EC, Jean Mensa, to go and consult with Mr. Mahama over some grievances.

This led to them being absent from the National Collation Centre when the election results were declared.

He is also set to be cross-examined by counsels of the EC and President Addo Dankwa Akufo-Addo, the Second Respondent, having filed the witness statement in support of the petitioner, John Mahama.

Mr. Mettle-Nunoo together with Dr. Kpessa-Whyte were agents for the petitioner on Election Day and were responsible for the review and certification of the presidential election results in accordance with regulations spelt out in CI 127.

In his 32 paragraph-witness statement chronicling some of the major events that occurred in the Strong Room, he categorically stated that Mrs. Mensa, who doubles as the sole Returning Officer of the presidential election, “did not perform the duties she was supposed to perform in order to be able to declare a winner of the election as she attempted to do.”

Touching on the key yet controversial issue of how the Chairperson of the electoral management body directed them [representatives of the NDC] to consult their flagbearer on some outstanding matters, Mr. Mettle-Nunoo narrated:

“Mrs. Jean Mensa informed me that there had been a meeting held earlier in the day between the Petitioner and the Peace Council, something I was unaware of at the time. After I further drew her attention to some of the issues that were coming up in the interactions in the strong room, she said very directly that we should go and speak with the Petitioner. Having regard to her earlier reference to the meeting between the Peace Council and the Petitioner, which she had obviously been briefed about, I took seriously what she said.  I do not think we, who were acting as agents of the Petitioner, should be seen as taking positions which many be contrary to what the Petitioner himself and had conveyed in a meeting that I was unaware of with a body such as the Peace Council which, I know has an important role in resolving disputes in connection with elections and calming tensions in the country. She indicated her own willingness to meet with the Petitioner.”

He maintained, he had no reason not to trust the EC and took her word and left the EC headquarters with his colleague [Dr. Kpessa-Whyte] adding that it was surprising to note later that the EC Chair declared the results while they were away upon her orders.

“Yet my colleague and I realised with shock, on our reaching the residence of the Petitioner that the EC Chairperson was in the process of announcing results. Attempts I made to reach the Chairperson of the EC by telephone for clarification proved futile as she had turned off her phones”, extracts of the witness statement further pointed.

Dr. Michael Kpessa-Whyte had insisted  when he appeared before the court last Wednesday that Jean Adukwei Mensa deceived him and Rojo Mettle Nunoo to leave the Commission’s strong room before the declaration of the presidential election results on December 9, 2021.

Dr. Kpessa-Whyte, while being cross-examined by the Electoral Commission’s lawyer, Justin Amenuvor, said it cannot be said that his narrative of the happenings on the night of the declaration of the results was a concoction.

“I have no reason for lying. When we were leaving the room, I informed in the open room to the hearing of everybody that we were instructed by the Chairperson of the EC to go and consult with our flagbearer who is the petitioner on the basis of our observations and therefore, she was going to make sure that she send a rider to bring us back to the strong room because of the potential of traffic then therefore when we finish the process then the results will be announced,” Kpessa-Whyte said.

Justin Amenuvor in his cross-examination sought to prove that Mr. Kpessa-Whyte and Rojo Mettle-Nunoo were never instructed by Jean Mensa to leave the EC strong room but rather left on their own volition.

From the witness, he confirmed that Mr. Kpessa-Whyte did not personally hear from the EC Chairperson but got the information from Rojo Mettle-Nunoo who rather spoke with the Chairperson of the EC.

Dr. Kpessa-Whyte added in his testimony that they left their laptops in the EC strong room and moved in one car to John Mahama only to return after 40 minutes to meet the strongroom deserted with the election results already declared, a claim Mr. Mettle-Nunoo corroborated in his statement.

“On the basis of this, when we were leaving the place, we left our laptops. We left in only one vehicle. I left my vehicle in the premises of the Electoral Commission. Why would we leave our laptops and our working tools in the place if we were actually not instructed to go?… Indeed, we returned to the place in about 45 minutes to 1 hour only to have the strong room completely deserted and everything packed out,” Kpessa-Whyte said.