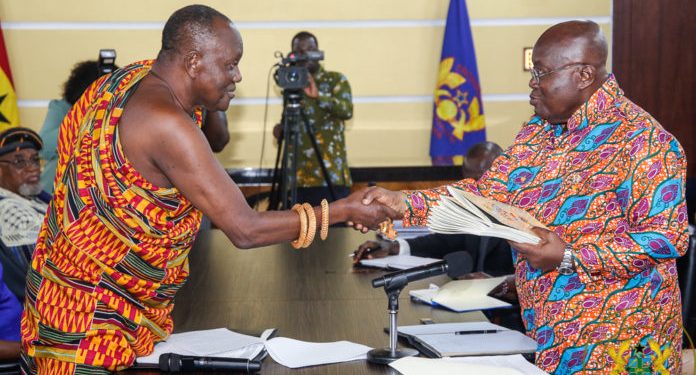 President Nana Addo Dankwa Akufo-Addo has made appointments to the Council of State for his second term.

The President named 11 persons including the immediate past Chair of the Council, Nana Otuo Siriboe, to form part of the composition of the Council according to a release from the Jubilee House.

The full members are:

The President, subject to consultation with Parliament, has also appointed, in accordance with Article 89(2)(a)(i)(ii) and (iii), Georgina Theodora Wood, a former Chief Justice, Lt. Gen. J.B. Danquah, a former Chief of Defence Staff of the Armed Forces, and Nana Owusu Nsiah, a former Inspector General of Police, to the Council.

The President of the National House of Chiefs, Ogyeahohoo Yaw Gyebi II, is an ex-officio member of the Council, in furtherance of Article 89(2)(b).

The composition of the Council will be completed with the election of regional representatives, due to be held on 12th February 2021 in accordance with Article 89(2)(c).

What does the Council of state do?

The Council of State is to among other things counsel the President in the performance of his functions.

It may also, upon request or on its own initiative, consider and make recommendations on any matter being considered or dealt with by the President, a Minister of State, Parliament or any other authority.

It is required to meet at least four times a year.

Already, the Electoral Commission (EC) has opened nominations as part of processes for electing regional representatives to the Council of State.

The Commission in a statement indicated that qualified persons who intend to contest in the said elections should submit their nomination forms with two post-card size copies of recent photographs (bust) to the Regional Director of their respective Regions from Monday, February 1, 2021, to Thursday, February 4, 2021, between the hours of 9:00 am and 12:00 pm and 2:00 pm to 5:00 pm each day.

“Copies of the nomination forms may be downloaded free of charge from the Electoral Commission’s website (www.ec.gov.gh) and completed in triplicate,” it noted.

The Elections will be held in all Regional Capitals on Friday, February 12, 2021.

GameStop investor battle moves on to silver as prices surge