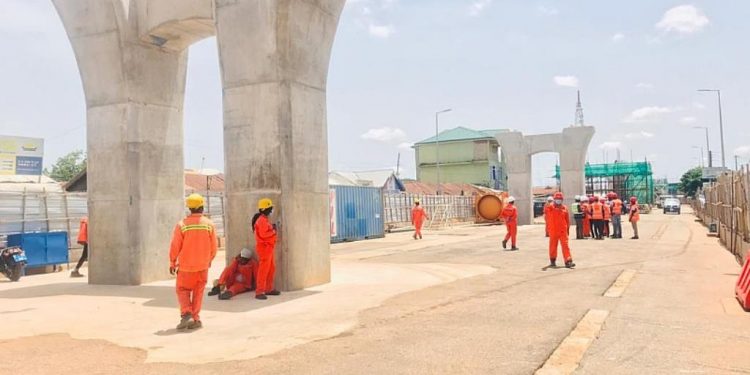 Some workers of the Sinohydro Company Limited working on the Tamale Interchange who embarked on strike over service conditions have called off the industrial action.

The aggrieved workers, numbering over 50, raised concerns about the non-payment of annual leave benefits which have allegedly been in arrears for over three months, risk and height allowances among others.

In an earlier statement issued by the workers, they accused management of failing to address their concerns after several engagements.

But after meeting with management and union executives today [Thursday], the staff have decided to resume operations.

A Citi News visit to the construction site saw some workers busily working.

In contrast, the union executives for the workers have denied knowledge of such statement, saying not all workers joined the strike but only some 65 workers whose annual leave benefits have been in arrears.

In an interview with Citi News, chairman of the union, Alhassan Alobo noted that even though they did not issue the statement, they are aware of the concerns raised by the workers.

He said they have been in discussion with management to ensure leave requests for qualified workers are approved with benefits and other allowances due them paid.

“We do not want any form of confusion at the worksite. When they were going on strike against the company, they should have sat with their leaders. The union is unaware of the strike they embarked on. The foreman is not even aware. Only the workers decided to lay down their tools, although we were preparing for the increment payment. So we are waiting for the union to come, so we sit down and address the issues.”

Explaining to Citi News why payment of the workers’ allowances have delayed, the Human Resources Manager for the Sinohydro Project, Iddrisu Awudu said, the officer in charge of the payment has been away and is expected to return this month.

“The reason why the money is not being paid early is that, the person in charge is not around. It is not as if the company is refusing to pay them. We explained all this to them, but the workers said they will not understand because we are giving them false information.”