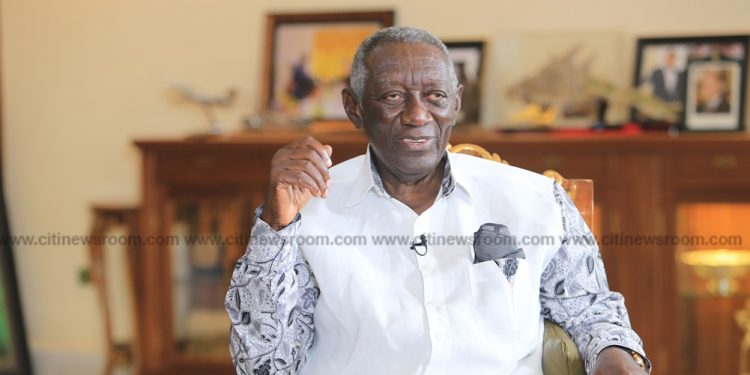 Former President, John Agyekum Kufuor believes one of the critical means to tackle unresolved crime in the country is the use of modern technology.

He says the adoption of technology by the government will help to provide the state with the necessary evidence to prosecute offenders of heinous crimes, many of which have hit dead ends.

Mr. Kufuor says the unavailability of such a system will always give way to accusations that the government is doing little to deal with such matters, usually because of its alleged culpability of criminal activities due to political intolerance.

Speaking to Citi News‘ Bernard Avle, the statesman said the government can only absolve itself of blame if it invests heavily in technologies like CCTV cameras, among other things, to curb crime and prosecute offenders.

“One thing we should urge is that we have been talking about technology. So we should urge the government to equip security agencies with the technologies and mechanisms, so we can bring to book quickly, culprits who want to offend individuals and want to derail the stability of our communities”, he said.

J. A Kufuor during the interview also said claims of an apparent return of the culture of silence in Ghana by Sir Sam Jonah should not be dismissed or discredited.

According to him, the claim must be examined in detail and perhaps evidence looked into before a conclusion is made.

The former President said he believes Sam Jonah’s comment might be based on some experiences he has had and on his pedigree, and such claims must not be taken lightly.

“They have their experiences, so I am in no position to say what they are saying is unfounded. For a man like Sam to speak the way you have cited him as saying, suggests that he has some evidence,” Kufuor said.

Statesman, Sir Sam Jonah, while delivering a speech at a public lecture with Rotarians in Accra under the theme; ‘Down the Up Escalator: Reflections on Ghana’s Future by a Senior Citizen’ on April 22, 2021, remarked that the culture of silence was slowly creeping into the country through convenience, hypocrisy and parochialism.

“It appears to me that in recent times in our Fourth Republican dispensation, the courage to stand up for the truth and the determination to uphold the common good is lost. In our dark moments as a nation, it is concerning that the voices of the intellectuals are receding into oblivion. Sadly, it is a consequence of the deep partisan polarisation of our country such that everything is seen through the lenses of politics.”

“It appears to me that the culture of silence has returned. This time not enforced by legal and military power but through convenience, parochialism, hypocrisy, and a lack of conviction. Where are our Adu Boahens and PV Ansahs?” he said.

Following that comment, many have expressed divergent views with some challenging his claim.

But former President John Kufuor believes that Sam Jonah’s comment should be given attention and be considered.

“They say freedom is not handed on a silver platter, sometimes you fight for it. This is part of the uses of the media, to dare to speak up to uphold public interest… Sam [Jonah] has said it and Sam is very responsible and a high member of the community. [I want] to say that it should not be treated casually. He might have something he is advocating [for], and it is not for me to dispute him. Just saying, when you allege, you prove it. You don’t put it all on the government as such,” Kufuor said.