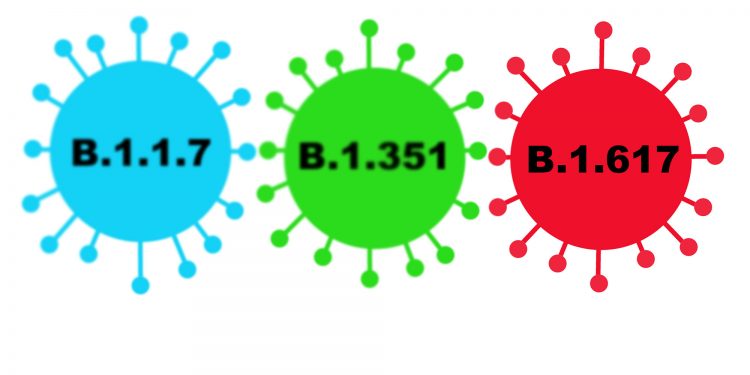 The terminology of variations in viruses can be confusing because the media and even scientific communicators often use the terms variant and strain interchangeably. All living things produce their offspring, and in viruses, this is known as ‘replication’.

It may result in the introduction of mutations (changes) throughout the viral genome (the building blocks/bricks that make up a virus). When specific mutations, or sets of mutations, are selected through numerous rounds of viral replication, a new variant can emerge.

If the sequence variation produces a virus with distinctly different phenotypic characteristics, the variant is co-termed a strain. Through a process of evolutionary selection, a new variant becomes predominant. Like the ‘survival of the fittest’ this new variant might have some survival advantages such as being more readily transmittable, more virulent, or pathogenic; and can evade immunity induced by vaccination or prior infection.

The speed with which SARS-COV-2 variants evolved required a common nomenclature for effective communication (Table 1).

The trouble started somewhere around April 2020, when the original SARS-CoV-2 strain was replaced in many regions of the world by a variant called D614G, which was subsequently shown to increase the efficiency of viral replication in humans and animals.

In October 2020, the UK detected an emerging variant of concern, later termed B.1.1.7 or Alpha variant, which is now the predominant variant globally. The B.1.1.7. contains 8 mutations in the spike protein (Fig. 1) and maintains the D614G mutation. Studies showed that the Delta is 40% to 80% more contagious than B.1.1.7.

The Director-General of the World Health Organization, Dr. Tedros Adhanom Ghebreyesus told a news briefing, “Delta is the most transmissible of the variants identified so far. It has been identified in at least 85 countries and is spreading rapidly among unvaccinated populations.”

The German Chancellor Angela Merkel has warned that Europe is “on thin ice” as the Delta variant of Covid-19 spreads on the continent. Her warning came as EU health officials said the variant would account for 90% of the bloc’s cases by late August.

Reports from France suggest the Delta variant is responsible for more than 10% of all new Covid-19 infections across the country. The Russian capital, Moscow, has seen its highest number of daily deaths in June 2021 since the pandemic began – the Delta variant is responsible for 90% of new infections, according to the city’s mayor. It is worth remembering that the Covid-19 Sputnik vaccine is produced in Russia.

In the last week of June 2020, authorities in several countries – from Bangladesh and Indonesia to Australia and Israel – are racing to contain the spread of the highly contagious Delta variant of the coronavirus, according to Al Jazeera news. Israel, which has one of the world’s most successful vaccination campaigns, has seen infections linked to the Delta variant surge since dropping a requirement to wear masks in enclosed public places.

While vaccination campaigns have brought down infections in mostly wealthy and well-vaccinated nations, the rise of the Delta variant has stoked fears of new waves of a virus that has already killed nearly four million people.

Vaccines could be less effective if

In 1918 the Spanish flu pandemic killed over 50 million people globally and that was caused by the Influenza A virus. Influenza A virus is an RNA virus just like the coronavirus and so mutates naturally as it moves among humans and animals.

Currently, Influenza A vaccines are updated every other year or so to keep up with the evolving variants. Similarly, it is very possible that next year Covid-19 vaccines composition would have to change in line with emerging variants.

The speed at which the Delta variant and its sibling, the Delta plus are evolving could render current vaccines less effective if an emergency global approach to controlling the spread of Covid-19 is not taken.

The author predicts that current vaccines might not be effective for SARS-COV-2 variants in 2022. Factors that could drive the low vaccine efficacy include (i) the huge > 95% unvaccinated population globally; (ii) geopolitical and population differences; (iii) emergence of more variants of concern; (iv) lack of vaccine efficacy testing to detect variants among nations, especially the poor ones.

Rapid global deployment of vaccines with the aim of attaining some level of “herd immunity’ whilst efforts are ongoing to develop other SARS-COV-2 vaccines is probably the solution.

The author, Professor Mohamed Mutocheluh is an Associate Professor in the Department of Clinical Microbiology of the School of Medicine and Dentistry, Kwame Nkrumah University of Science and Technology, Kumasi. | Email: mmutocheluh.chs@knust.edu.gh or mutocheluh@gmail.com