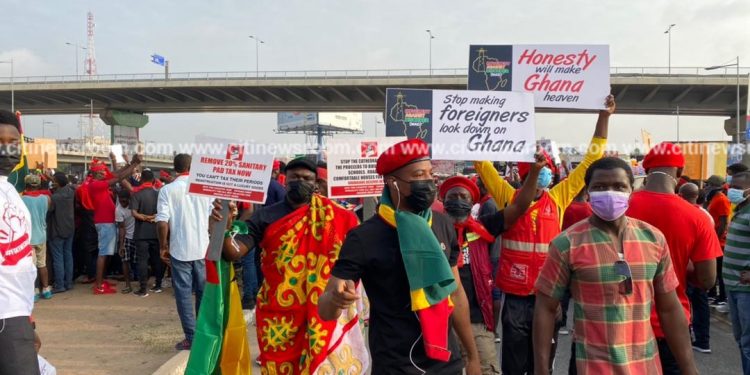 One of the Conveners of the #FixTheCountry demonstration, Ernesto Yeboah, has disclosed that similar protests like the one held on [Wednesday, August 4, 2021], will take place in other parts of the country.

He says the organisers are not going to rest until the country gets better. He made this known in a Citi News interview during the protest.

According to him, the plight of the ordinary Ghanaians is their sole reason for the protest.

He thus assured Ghanaians not to worry, adding that they are ready to put the leaders of the country on their toes.

“This is the beginning of more protests. We will be rolling out our plans for what next and Ghanaians should be sure that every space in this country is going to have a taste of what has happened here in Accra.”

Thousands of Ghanaians on Wednesday, August 4, 2021, participated in the much-publicised #FixTheCountry protest.

The demonstrators demanded among other things a new constitution and steps to address the many challenges facing the ordinary Ghanaian.

The protestors wielded placards with varying inscriptions including ‘#FixOurEducation System now’, ‘A new constitution now’, ‘Justice for Kaaka’ and ‘If Ghana was your personal property, would you run it like this?’, and several others.

The well-attended protest was to pile pressure on the government to address Ghana’s numerous challenges, including youth unemployment, poor infrastructure, and high cost of living.

The street protest comes after several weeks of social media mobilization amidst a legal tussle that nearly stopped the protest.