University of Ghana swears in Emelia Agyei-Mensah as new Registrar 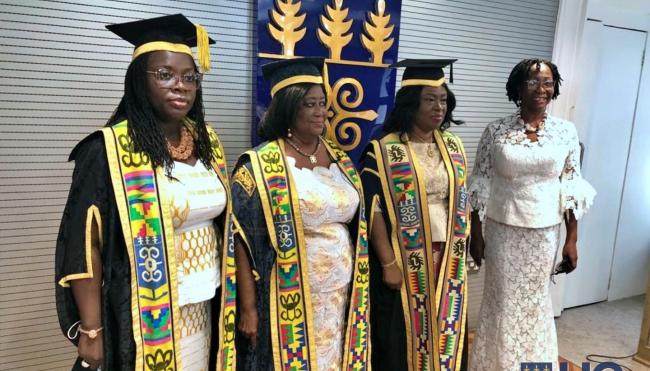 The Chancellor of the University, Mrs. Mary Chinery-Hesse, who declared the purpose of gathering, noted that the ceremony had to be held as scheduled in order to prevent an administrative vacuum as the tenure of the outgoing Registrar ended on July 31, 2021.

She also expressed confidence in the incoming Registrar, who has gained extensive knowledge in university administration, to have a successful tenure.

She looked forward to a fruitful working relationship.

The Chancellor administered the oath of office and oath of secrecy as stipulated by the Basic Laws of the University of Ghana prior to the assumption of office.

After the ceremonial handing over of notes to mark the end of the old tenure, the Acting Vice-Chancellor and the outgoing Registrar robed the new Registrar in a ceremonial gown.

In a response from Mrs. Agyei-Mensah, she indicated that she will embrace best practices and effective leadership to ensure the delivery of quality services to students, faculty, staff, alumni and other stakeholders.

She acknowledged that the University, like the rest of the world, has faced many challenges in recent times but pledged to work with Senior Management to address them.

The Registrar further pledged to build on the efforts of her predecessor to ensure that the University administration works effectively and efficiently.

In 2014, she was promoted to Deputy Registrar. Until her appointment as Registrar, Mrs. Agyei-Mensah served as College Secretary of the College of Education.

As the Chief Operating Officer of the University, the Registrar will serve as Secretary to the Chancellor, University Council, and Academic Board.

Mrs. Agyei-Mensah started her secondary education at Achimota School, where she completed the GCE Ordinary level examinations, and proceeded to Mpraeso Secondary school for Sixth Form and the Advanced Level examinations.

She gained admission to the Ghana Institute of Journalism and graduated with a Diploma in Journalism with distinction in 1986.

Married to Professor Samuel Agyei-Mensah of the Department of Geography and Resource Development, University of Ghana, the couple has two children.

We are committed to saving lives and property – Fire service