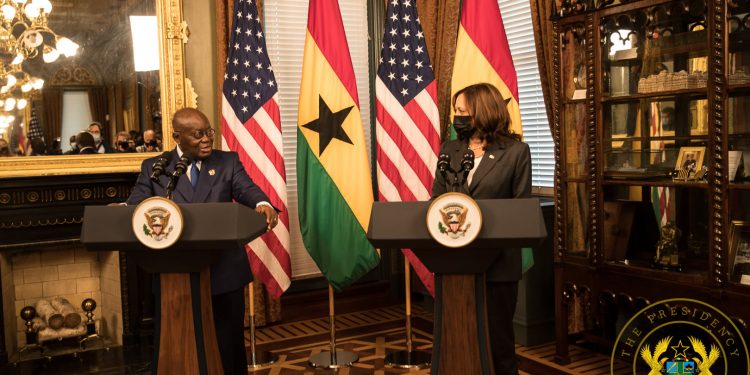 The Economic Community of West African States (ECOWAS), is courting the support of the US government to end insurgency in the West African subregion.

The ECOWAS Chairman and President of Ghana, Nana Akufo-Addo, said the support is not in a form of American troops.

He, however, explained that the support is rather needed to strengthen intelligence agencies within the region.

Speaking at a meeting with US Vice President, Kamala Harris at the White House, Nana Akufo-Addo on Thursday, September 23, 2021, said the recent cases of attacks in West Africa need to be dealt with.

“The other preoccupation is the cooperation that we have to put together to defeat the Jihadist insurgency in Sahel Africa. It is a major security preoccupation and the G5 Sahel and the ECOWAS have all come together to push back, and I believe it is an area where the support of the US government is needed. And we are not seeking military assistance in a form of American troops, but we are looking for support for our armed forces and for the intelligence agencies in the area so that they can be stronger in fighting these groups.”

Despite the significant efforts made by ECOWAS Member States, particularly those on the frontline, terrorist attacks doubled between 2020 and the first five months of 2021.

Dr. Jean-Claude Kassi Brou, the President of the ECOWAS Commission, said over that period, there had already been more than 700 attacks and more than 2,000 civilian and military deaths, with an increase in the number of displaced persons.

He said those attacks occurred largely in Burkina Faso, Mali, Niger, and Nigeria, spreading to other coastal countries.

Dr. Brou said this in his address at the 59th Ordinary Session of the ECOWAS Authority of Heads of State and Government in Accra.