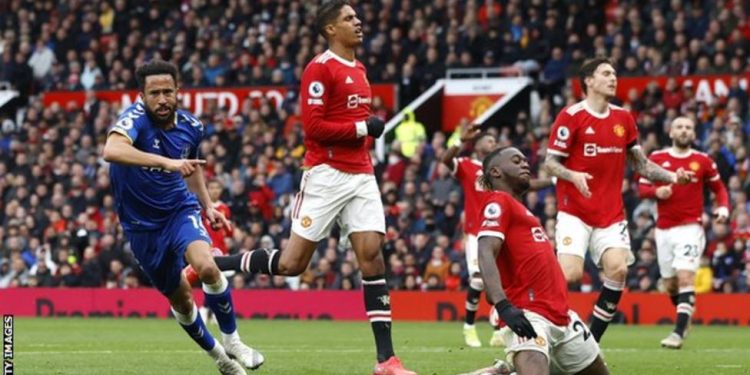 Rafael Benitez’s men were unlucky to fall behind just before the break as Anthony Martial scored for the first time since February.

But Demarai Gray escaped the attentions of Fred and Aaron Wan-Bissaka as Everton countered from a United corner, setting up the attack which ended with Townsend driving a low shot into the corner from Abdoulaye Doucoure’s lay-off.

Townsend celebrated in Cristiano Ronaldo-esque fashion. It was more than the man himself managed. Left on the bench after his injury-time winner against Villarreal on Wednesday, Ronaldo came on in the 57th minute but had minimal impact either before or after the equaliser.

Everton thought they had a winner four minutes from time but VAR intervened to rule Yerry Mina’s tap-in out for offside.

The result completes a decidedly unimpressive run of home results for Ole Gunnar Solskjaer’s team, who lost against Aston Villa seven days ago after being dumped out of the EFL Cup by West Ham.

Even at half-time, with United top of the ‘in-play’ table, there remained so many questions to be asked of Solskjaer and his team.

More should be known in the weeks following the upcoming international break.

Home fixtures with Liverpool and Manchester City, plus tricky trips to Leicester and Tottenham will, at the very least, give an indication about United’s ability to challenge for the title deep into the season, something they looked like doing last term, only to fade badly in January just as Pep Guardiola’s squad were surging clear.

For the opening 10 minutes against Everton, they retained the speed and fluidity so often lacking. And then it drifted away.

By the time Martial broke the deadlock, it was the visitors who were carrying the greater goal threat. Salomon Rondon and Abdoulaye Doucoure had shots blocked and David de Gea produced a superb one-handed save to deny the excellent Gray.

That opportunity was created when what should have been a straightforward pass to Edinson Cavani from Fernandes went straight to Lucas Digne.

Cavani did bring a good save out of Jordan Pickford with a downward header when the game was still goalless and Jadon Sancho might have done better with a late opportunity that he drove straight at his England team-mate. But even with Paul Pogba introduced from the bench as well, it was all a bit haphazard from the hosts and never looked like bringing greater reward.

After his appointment as manager triggered so much controversy amongst the Goodison Park faithful, Rafael Benitez has quietly gone about constructing a very impressive team.

The flakiness of James Rodriguez has been replaced by a durability that will not be swept aside quite so easily.

Even without the injured Richarlison and Dominic Calvert-Lewin, the Toffeemen were an effective unit, did not panic when United had the early momentum and took their time to grow into the game.

And, given United have not kept a clean sheet at Old Trafford in the Premier League since March, they must have known opportunities would come their way.

Gray in particular was outstanding, although it could be argued more streetwise players than Fred and Wan-Bissaka would have prevented him getting out of the situation from where the goal came, either through fair means or foul.

And while Mina was certainly offside, Tom Davies had enough clear space in front of him to go for goal himself as Everton came close to a win.

Manchester United’s next Premier League game is at Leicester on Saturday, 16 October (15:00 BST). Everton are next in action against West Ham on Sunday, 17 October (14:00).

Work towards devoting 15% of GDP to health – Prof. Peter Donkor to Government