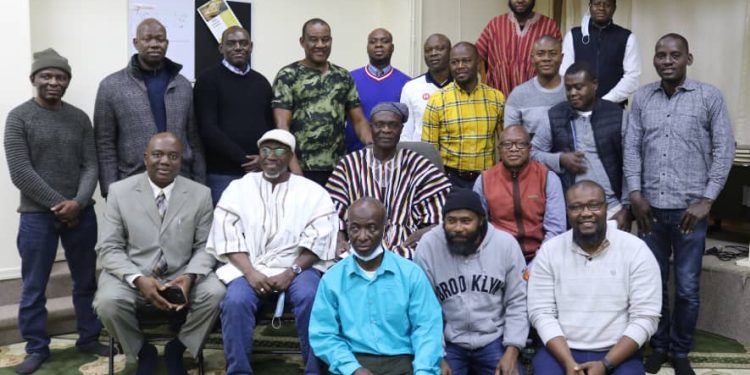 The Diaspora Community of northerners in New Jersey, USA,  on Sunday 7th November hosted the Northern Regional Minister, Shaibu Alhassan Shani, and his entourage at the Masgid Bilal Mosque in Jersey City.

The group requested to meet with the Regional Minister to officially welcome him to the USA and also offer them the opportunity to interact with him as the political head of the region.

In his opening remarks, the leader of the group, Mr. Alidu Andani, welcomed the entourage and also thanked the Minister for accepting to honour their invitation.

He introduced the group to the Minister and outlined the purpose and the operational guidelines of the group.

He explained that one unique feature of the group is their non-political nature. He indicated that their objective is to explore opportunities available back in the Northern Region so that they could consider taking advantage to invest.

On his part, the Northern Regional Minister expressed his excitement for the opportunity to interact with such a progressive group in the diaspora.

He indicated the mission of the delegation to the USA and how impressed he is to witness such an organised group in the diaspora.

He recalled how the President appointed him to office as the Northern Regional Minister in March 2021, and challenged him to explore other non-traditional ways of attracting development to the region.

He acknowledged the contributions of those in the diaspora and emphasized the need for them to continue their support back home.

The Minister revealed that one key issue his administration has so far dealt with is prioritizing and sanitizing security in the region.

He added that his administration is creating the avenue for more indigenous businesses to grow in the region and also attract investment opportunities for indigenous people to explore.

He outlined some infrastructural projects the region will be witnessing in coming years that include the dualization of some principal streets in Tamale.

He used the opportunity to call on the group to consider forming partnerships to be able to take full advantage of investments opportunities within the region.

The Minister concluded by strongly appealing to them as a group or individuals to submit to his office any investment proposals for the necessary support.

The Minister is in the USA to participate in the Sister Cities International program that honored Ghana’s Ambassador to the USA for her role in contributing towards the promotion of the Sisters cities program in Ghana.

The event was initiated and coordinated by the African Global sister cities foundation.

Some members of the group made several observations and remarks including the need for the Minister to intervene to protect some strategic lands in the region and stop the sale of government lands in Tamale.

They also appealed to the Minister to consider establishing a diaspora Affairs Office at the Regional Coordinating Council to deal with the diaspora community, especially when they return home to invest, and encounter challenges.

The delegation includes Alhaji Issahaku Alhassan, the Chief Director of the Northern  Regional Coordinating Council, and Osman Mubarik Abu, the Executive Secretary of the Sister Cities of Tamale.