The Ghana Grid Company (GRIDCo), has blamed “significant disturbance” in its power systems as the cause of the widespread power outage experienced in most parts of the country on Monday night.

It said its power generating units at Aboadze and Bui tripped, hence the incident.

It, however, says the situation has been rectified as of the morning of Tuesday, November 9, 2021, although it encountered a similar problem again minutes after it restored power at 4.30 am.

Many parts of the country including Takoradi, Dansoman, Nima, Teshie, Tarkwa, and areas in the Bono Region reported of the outage.

But GRIDCo explained that “All generating units at Aboadze Enclave and Bui tripped, resulting in a power outage in sections of Accra, the Western, Middle and Northern parts of the country.”

“At 4.50GMT on Tuesday, November 9, 2021, in the process of restoring the remaining BSPs, a second disturbance occurred, resulting in the loss of generating units at Aboadze Enclave and Bui. This led to another interruption of electricity supply to several areas of Accra, the Western, Middle, and Northern parts of the country.”

GRIDCo says it has since restored power to all the Bulk Supply Points and will “continue to provide a stable power system for dependable and efficient power supply for national and economic growth.” 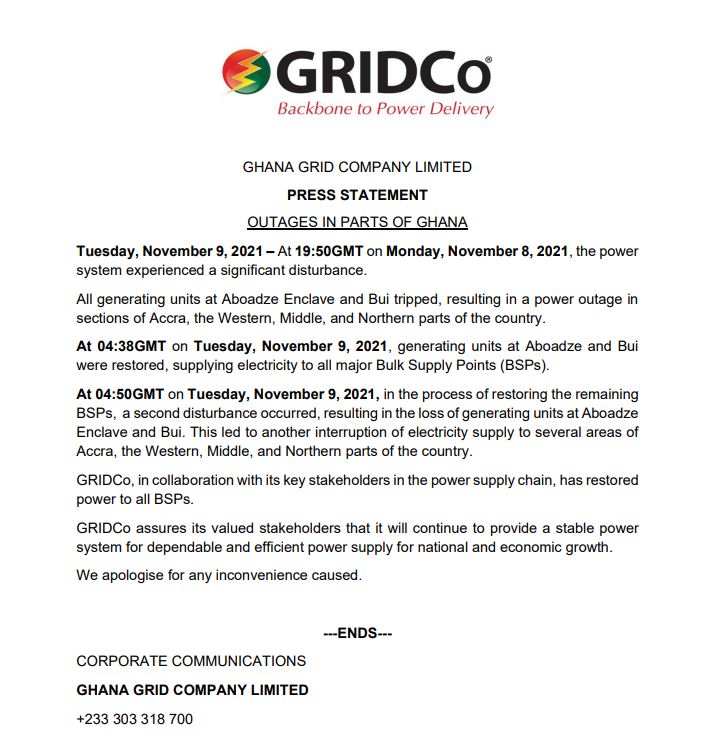