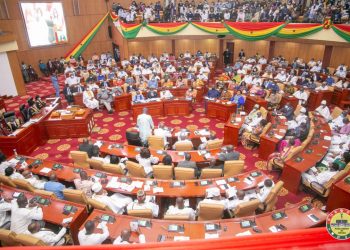 Members of Parliament will begin debate on the 2022 Budget Statement later this week.

The debate on the policy and principles of the budget statement will begin on Tuesday 23rd November and end on Friday  the 26th of November.

The Minister for Finance last Wednesday presented the 2022 budget to Parliament announcing various plans and programs on how government intends to shore-up revenue and to enhance job creation in the 2022 fiscal year.

The budget statement among other things indicated that government intends to raise revenue through the imposition of 1.75% levy on all electronic transactions.

There’s also a 15 percent increment in the cost of all government services effective next year.

The Minister for Finance also announced the commencement of a GHS 1 billion ‘YouStart’ initiative to boost job creation for the youth.

While the majority caucus believes that the budget reflects the needs of Ghanaians and necessary measures relevant for stimulating growth in the economy, the minority caucus says the budget will lead to untold hardship on the already suffering masses.

The Minority Leader, Haruna Iddrisu, has also reiterated that the caucus will kick against the 1.75% e-levy.

“Our concern is whether the e-levy itself will not be a disincentive to the growth of a digital economy in our country. We are convinced that the e-levy may as well even be a disincentive to investments and private sector development in our country… We in the Minority will not support government with the introduction of that e-levy. We are unable to build national consensus on that particular matter,” he said at the post-budget workshop in Ho on Saturday.