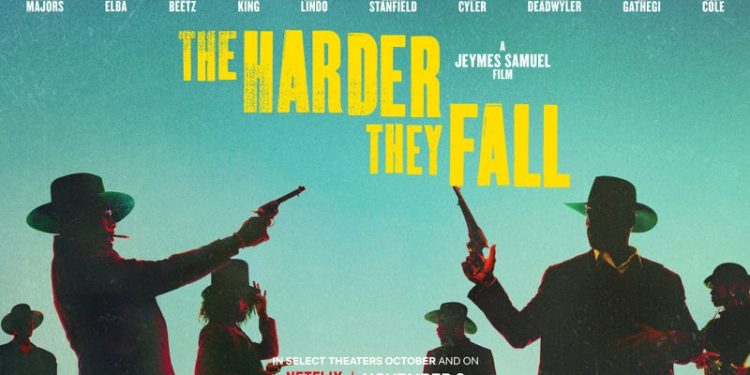 Rufus Buck – an acclaimed ruffian – sets the reel in a bloody motion as he truncates a family dinner. Nat Love a defenceless young lad witnessed this macabre spectacle. As if the gruesome murders were not enough, Rufus carves an emblematic crucifix on young Nat leaving an indelible symbolic and psychological scar. Time wears on.

And Nat, once a boy begins his quest to exact revenge following his encounter with Rufus’s tattoed-handman – whose onomatopoeic death, possibly connotes the caption of the movie: ”The harder they fall”.

Set in an arguably Old West (American Frontier), Jeymes and his co-writer Boaz Yankin assemble an ensemble of past heroes and morally apostates characters into a riveting amphitheatre. With the electricity of character, Treacherous Trudy majestically hijacks a highspeed train with ruthless Cherokee Bill and others to rescue Rufus.

Rufus – liked a caged dinosaur in pandora’s box is let loose in an ominous clime. As the portentous spiritual wrinkles, the face of the equally debauched transporting lieutenant – Rufus orders his cabal to unleash a massacre, pardoning only the youngest lad brimming with innocence. This act of clemency runs through the vein of the movie in Rufus’s encounter with his once loyal friend, Wiley Escoe, and earlier on, Nat.

Is Rufus – inebriated by violence- after all human or his bear’s genes incapable of finishing what he starts? Or he is merely paying tribute to Nietzsche, who chronicled “I obviously do everything to be hard to understand myself” in Beyond Good and Evil.

As the irony of fate would have it, Nat’s bandits whose catholic enterprise involved robbing outlaws end up ambushing and stealing from the Crimsons transporting Rufus’s $25,000 booty. Musician and entrepreneurial Stagecoach Mary who plays a hard-to-get lover to Nat delivers herself as a Trojan Horse to an already cash-strapped Rufus. Rufus seeking to rebuild Redwood into a Promised Land, we are never told.

In a show of love or rather an expedited effort to confront a mortal enemy, Nat ends up tortured and sent on a deadly mission to rob a white neighborhood bank to repay his $25,000 debt in addition to a $10,000 interest by Friday.

Aside the crisp cinematography, the suave costume picks were inch-perfect. The arresting song tracks featuring Fela Kuti, Jay-Z, Nina, and songs written by Jeymes purposively for this showdown were of proverbial significance. The songs coarsed through the scenes, giving premeditated knowledge of what is to come. You could smell the sporadic romance interrupt the course of retribution and irrepressible theme of tragedy. Nat, on whose shoulders a lot of justice fell tries to individualize his battle against the tide of ritual corporate responsibility known in most black communities as being each others keeper. His confrères especially Bill Pickette constantly remind him that: they live, enjoy, and die together.

Jeymes is likely a student of Socrates and Napoleon Bonaparte. He invokes suffuses Socrates “Man know thyself” and Napoleon’s conception of fate knowing that the sun sets on whatever draw breathe. He imbues in Rufus the person of Napoleon by citing Napoleon’s cogitation (I’m driven towards an end that I do not know. As I reach it, as I become unnecessary, an atom shall suffice to shatter me) as soon as he embarked on his Russian campaign.

Another angle worth interrogating transpired during the illusive transport of Nat by Marshall Reeves to Fort Smith. Confronted by StageCoach, Bill Pickette, Cuffee, and Jim Beckworth, Marshal intimates that “I saw the devil and Rufus Buck ain’t him. Devil’s white.” Now that’s a whole loaded statement begging for serious unpacking. “The Devil’s white” quickly averts the viewer’s mind to the statement made by Ludewig Ferdinand Romer in his book (A reliable account of the coast of Guinea (1760). Romer asserts that “they say that the devil is white, and paint him in the whitest colour.” Here we see a similar conceptualization of the devil in two spaces (Africa (among the Ga people) and the Old West (America). Soyinka ventilates similar sentiments about the Yoruba Cosmology of Eshu who like “nanni” the trickster spider is mistaken for the devil. Dr. Hermann Von Hesse points out that prior to the advent of Christianity in the 19th century – the concept of the devil was alien to Ghanaians. At best, “Sasabonsam” was a trickster, contrary to the current devilish connotation. But I digress, at what point did the devil become black?

Jeymes and Yankin concentrate so much in a little over two hours. Hopefully, the shadow of Treacherous Trudy who overlooks the departing Nat and Bill Reeves will offer viewers another opportunity of closure in understanding the aftermath of the bank robbery and a thriving black community with Greenwood-esque property and business-owning rights.